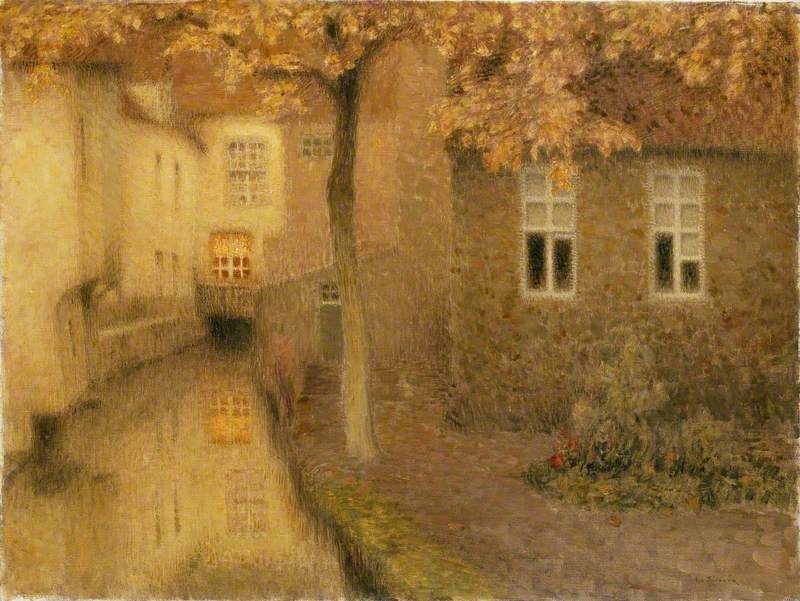 Henri Le Sidaner, ‘ A Canal in Bruges at Dusk’, c.1898 Courtesy of the Ashmolean Museum, Oxford.

This one day symposium will by held at the Maison Française d’Oxford on Friday 7 October, from 915 to 5:00.  It is organized by David Hopkin (Oxford) and Juliet Simpson (Coventry) and supported by the John Fell Fund, University of Oxford.  And while not dedicated to lace per se, lace features quite a bit, hence we’ve included information about it on this site.

The imagined Flemish city was the antithesis of the teeming metropolis of modernist invention, it was a world of enclosed gardens, silent squares and still waters, where nameless figures disappeared through secret doors; a world of reflections and glimpses, in which gothic traceries, convent grills and lace veils concealed as much as they revealed. This was also an uncanny world, offering portals to the Catholic realm of miracles, the glorious Flemish medieval past, and the city of the dead.  Here social realist concern for the lives of the poor combined with the spiritual yearning of the fin-de-siècle. This vision of the city inspired artists and writers, but it also influenced urban planners and social campaigners, who looked forward by looking back to craft guilds, enclosed communities and urban autonomy.