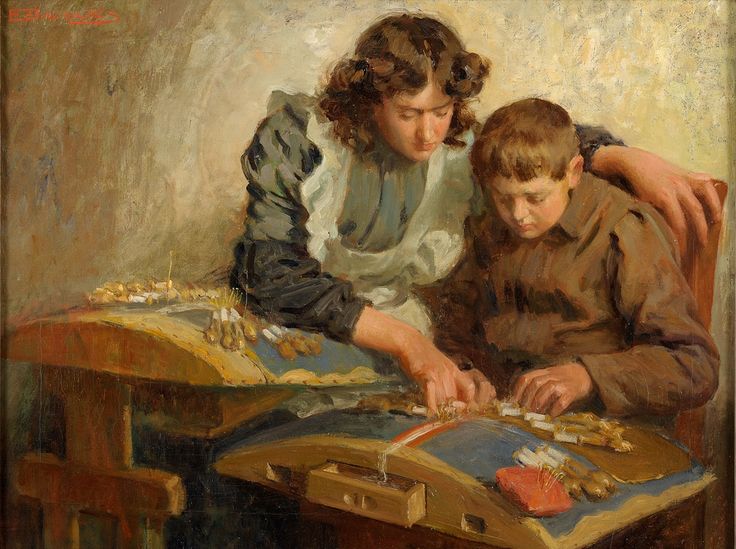 Did men make lace? A social investigation from the ‘Flanders Hell’.

In historical sources almost all the commercial lacemakers one encounters were women. But did men not make lace? It’s a question we’ve often been asked, and the answer is yes – but how many it’s hard to say.  Occasionally one discovers evidence of men making lace, but these reports usually concern periods of high demand when wages were very good, or periods when male-dominated industries had collapsed (such as the Breton herring fishing industry at the beginning of the twentieth century), and lace was introduced as a makeshift way for the unemployed to earn a living.  But it’s likely, not least because lacemaking was so clearly identified as women’s work, that official reports undercount the number of men who made lace on either a full-time or a part-time basis.

August De Winne (1865-1935, sometimes written Dewinne) was certainly shocked to discover that, in 1902 in Belgium, some men worked as lacemakers.  De Winne was a journalist for the Socialist newspaper Le Peuple.  The socialist movement was growing in Belgium in the period, but it had achieved greater success in the industrial towns of French-speaking Wallonia than in Flanders where the political influence of the Catholic Church still held sway.  In 1901 De Winne set out to discover the true conditions of the working population of Flanders, and the reasons behind their political attitudes. He particularly focused on the rural, inland regions of east and west Flanders which came to be known in the first decade of the twentieth century as ‘The Flanders Hell’, characterised by overpopulation, underemployment, poverty and misery. Here villagers did not work in factories, but laboured in their cottages at ‘sweated trades’ such as weaving, spinning, basket-making, rabbit-rearing (for fur rather than meat) and, of course, lace-making.  The collected articles were published as A travers les Flandres in 1902, and then again in 1903 in an extended Dutch language edition as Door arm Vlaanderen – ‘through poor Flanders’.  The title is an echo of an earlier novel of social protest, Arm Vlaanderen, by Reimond Stijns (1850-1905) and Isidoor Teirlinck (1851-1934). That novel was set during the first ‘School War’ which, as we know, directly concerned the lace schools.

The section below, focusing on male lacemakers, only figures in the Dutch edition.  De Winne’s interest had been piqued by a report on lacemaking in Belgium by Pierre Verhaegen. This was the first really serious Belgian study of workers’ conditions and pay in the industry, and although De Winne considered Verhaegen to be too close to the Catholic Church, he nonetheless thought his information was reliable.  Both De Winne and Verhaegen quote figures from the industrial census of 1896 which recorded that there were 47,571 lacemakers in Belgium, of which just 117 were men. But was that an underestimate?

Two other persons are named in the text: Charles Beerblock (1854-1914), a socialist activist from Lokeren; and Charles Lefébure (1862-1943), an engineer and amateur photographer who had accompanied De Winne and documented the social conditions he encountered on his visits. If you’re looking for Miere on a map, note that it is now spelt Mere.

“So it is true, there are men in Flanders who make lace?” I asked Beerblock.

“It was news to me. I discovered it from Monsieur Verhaegen’s report. I went with Monsieur Lefébure to meet the lacemakers from around Aalst; he took several lovely photographs. Would you like to go back there together?”

On a lovely spring morning we made our way to Meire, a small township of about 3,500 inhabitants, in an out-of-the-way corner of Aalst district, beyond the main lines of communication, just on the local railway to Ronse.

The town appears rather sweet and charming, bathed as it is in light and warmth. The road, lined with small, very neat houses, meanders gracefully through the smiling fields. The buds are sprouting on the hedges. The houses are hidden behind a curtain of trees.

What a delightful spot!

We enter a house. Potatoes are boiling away on a Leuven stove. The tall fireplace is covered with very rough religious prints. And to think that this is the picture that poor folk have of the Mother of God and of the saints! Is there really any difference between this crude religion and idolatry?

The mother, a little old woman, chats to a neighbor who has two children hanging from her skirt. By the window in a low chair sits an old man in a silk cap, a long beard like an apostle hangs down to his chest, in front of him a lace pillow.

At first, as I watch him turning the bobbins with his stiff hands, I find him a little ridiculous, but then I feel pity for this dignified old man, thus obliged to do women’s work, children’s work.

The mother stops chattering, the father and the young girls have turned to look at us. Beerblock is known here. He has come to show M. Lefébure’s beautiful photos. He takes them out of a large folder and displays them to the simple people. They marvel, utter cries of joy and surprise. “Look father! Look mother!” the young girls shout. “That’s John ‘the Frenchman’, that’s big Theresa, that’s Mary’s house!”

“How wonderful they are!”

We ask:“Old man, how long have you followed this occupation?”

“Since the age of six, sir. I have never done anything else and am now sixty years old.”

“What do you earn? How many hours a day do you work?”

“What would you say were the average earnings for the women of the village?”

“That depends both on the type of work and also on the skill of the workers. My daughters earn 1 franc a day for 12 to 13 hours of work. But a few steps further on from here lives a lace-worker who sits at her chair from 6:30 in the morning until 8 in the evening, with an hour of rest at noon. At the end of the week she will have earned just 3.80 francs.”

They are the figures for women’s earnings. Verhaegen only mentions a single male lacemaker, who was paid 70 centimes a day for 11 hours of work.

We leave the house in the company of the neighbour with her two children.

“They are good people, but under the thumb of the Church” she whispers to us when we have come a little way.

“Are there any villagers who are not of that persuasion?”

“People here have all kinds of convictions, sir: Catholics, Liberals, Christian Democrats and Socialists.” She adds, not without pride, “My husband is a Socialist.  He’s employed at the gas works in Brussels, where he earns 4 francs a day.”

“Certainly, but it’s not an easy life nonetheless. My husband has to leave at 3.45 in the morning, and gets to Brussels at 5am. In winter, when the works only open at 7am, he has to hang around for two hours, wandering through the streets or sitting in a bar. In the evening he gets back at 8.30. No, it’s no picnic his life!”

We say goodbye to the good woman. Beerblock tells me that about 40 gas workers, roadmen and masons live here, who travel to the capital every day. Those employed in the gas works have alternating shifts – one week of day work followed by one week of night work.  They prefer night work because the day trains provide better connection, so less time is lost.

Three hundred “Frenchmen” also live in Meire, so called because during the harvest season they go to France to find work. Some of these migrants also make lace during the winter. The same is true of the agricultural workers and the brickmakers who live in the village. We met some in the other houses we visited.

According to the industrial census [conducted in 1896], there are 114 men in Flanders who make lace, but Verhaegen thinks, with good reason, that the number of those who engage in this type of work in their free time, for whom it is an additional source of income, is much larger.

In Meire we also saw a number of boys sitting next to their mothers or sisters and who, like them, were working with bobbins. “It keeps them quiet” say the good people of the region.

Does a child actually need to play, to run about, to have fun, to go to school, to breathe the air, to strengthen his muscles, in order to develop? Why?

Later, as a man, he’ll become a farmer or a brick maker; maybe he’ll travel along the roads of France looking for work or he’ll sit in front of a lace cushion for thirteen hours a day. On Sunday he’ll first pray and then get drunk on gin.Work, prayer, and generating more members of their unfortunate race, that is the whole destiny of these men and women, and the destiny of the children of Flanders!