We continue our posts on lacemakers in Flemish fiction with a look at Stijn Streuvels.  Unlike almost all the other Flemish authors considered in this series, you can read some of the novels and stories by the prolific Streuvels in English.  We don’t know why, but British publishers from the nineteenth century onwards took little interest in the cultural production of the Flemish Movement, and not much more of Belgian literature in French.  Even in the case of Streuvels, who twice came close to winning the Nobel Prize for literature, translations are rare.  His Langs de Wegen (1902) was translated in 1936 by Edward Crankshaw as Old Jan; while De Vlasschard (1907) was translated as The Flaxfield by Peter Glassgold and André Lefevere in 1988.  Both are quite hard to come by, and neither are primarily concerned with lacemakers.  Streuvels’ 1909 novella ‘De Blijde Dag’ is set among lacemaking girls in an orphanage, but this is not available in English.  (The title translates as ‘The Happy Day’; we should add that happiness is at best a relative concept for Streuvels, whose work might be characterised as pastoral fatalism.)  That leaves the stories translated byAlexander Teixeira de Mattos and gathered together in a volume entitled The Path of Life (London: Unwins, 1915).  This collection is available online for free, and it includes ‘Wit Leven’ which first appeared in Flemish in the literary modernist magazine Van Nu en Straks in 1897, and in English as ‘White Life’ in The English Review in 1912.

Streuvels, whose real name was Franciscus (Frank) Lateur (Courtrai 1871 – Ingooigem 1969) started his working life not as a pastry chef, like Frans Carrein, but as a village baker in Avelgem in West Flanders.  He read voraciously in between his bread-making tasks, and taught himself numerous languages.  (In later life he would translate the work of another baker-writer who had been raised among lacemakers, Maxim Gorky.)  He only gave up the bakery in 1905 to dedicate himself to literature when his reputation as an anticlerical and a freethinker began to damage the family business.  West Flanders was then a bastion of clerical authority.  Streuvels maternal uncle was the priest-poet Guido Gezelle, almost unknown in Britain but in Belgium probably rated as the most important writer in Flemish.  Gezelle, too, ran foul of the ecclesiastical authorities for his writings, but he chose obedience rather than resistance.

‘White Life’ we think rather a good title for a story about a lacemaker.  Its heroine, Sofie, does indeed live her life in white – ‘Her life flowed on as a little brook flows under grass on a Sunday noon in summer, flowed on in calm seclusion, far from the bustle of the crowd, secretly, steadily, uninterrupted save by ever-recurring little incidents, peacefully approaching old age.’  She works in a whitewashed room with white curtains under a cap of white, and at night sleeps between white sheets under a canopy of white.  A statue of the Virgin, clad in white watches from the wall, while a canary in a white cage is her only company.  The canary and the geraniums at her window are almost the only splashes of colour in her existence (one day we might write a blog about lacemakers, canaries and geraniums).  Her ‘white and peaceful little soul’ is innocent of anything but her daily tasks and piety.  She lives almost like a nun, or a beguine, dividing her time between lacemaking and readings from Thomas à Kempis’ The Imitation of Christ and saying her rosary. 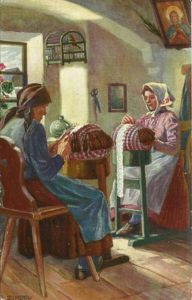 Erzgebirge lacemakers by Gustav Zindel. Note the canary and the geraniums. Zindel (1883-1959) was a Czech-German painter and illustrator of folk life.

Lacemaking is part of her separation from the ‘bustle of the crowd’, for it draws her into a world in itself.  Her pillow

‘was her only amusement, her treasure: this half-rounded arch of smooth, blue paper on the wooden pillow-stool, occupied by a swarm of copper pins, with coloured-glass heads, and of finely-turned wooden bobbins, with slender necks and notched bodies, hanging side by side from fine white threads or heaped up behind a steel bodkin. All this array of pins, holes, drawers and trays had for her its own form and meaning, a small world in which she knew her way so well. Her deft white fingers knew how to throw, change, catch and pick up those bobbins so nimbly, so swiftly; she stuck her pins, which were to give the thread its lie and form, so accurately and surely; and, under her hand, the lace grew slowly and imperceptibly into a light thread network, grew with the leaves and flowers of her geraniums and phlox and the silent course of time.’

This peaceful if monotonous existence is interrupted when the grate on her stove needs mending and she takes it to the smith, Sander, next door.  He has already made his presence known, hammering away in the background.  But now he takes to calling in the evening, sharing a cup of coffee and a bit of a gossip about village affairs.  His eyes are kindly and impish, the smell of his pipe makes such a change in her routine.  And she begins to think ‘that calm rest, in which she had once found such a pure delight, was now a heavy weariness’, that an alteration that brought together two lonely people of mature years might do them both good.  She could teach him the rosary.  Sander too has ambitions towards matrimony.  This envisioned idyll comes to a shocking end when the smith gets drunk celebrating the feast of Saint Eligius (Eloi, the patron of metalworkers).  He breaks into Sofie’s house and assaults her.  Neighbours hearing her screams haul him off.  But now not only her new dreams of companionship but also her old ‘white life’ have been ‘stamped to pieces’, and she has been left like a naked child freezing in the snow.

We did warn you that happiness was in short supply in Streuvels’ Flanders.