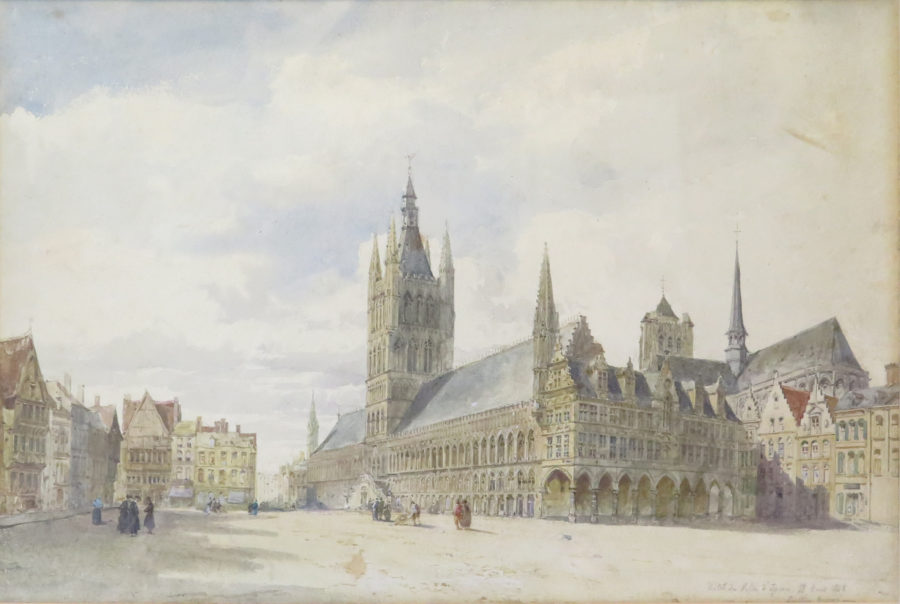 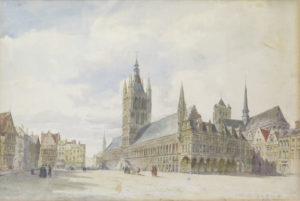 18 August 1848, and all seems quiet on the main square of Ypres. This watercolour of Ypres Town Hall (the Cloth Hall) by Justin Ouvrié (1806-1879) can now be found in Ypres Museum.

In the spring of 1848, as revolution spread from Palermo and Paris across large swathes of the continent, one country remained conspicuously quiet: Belgium.  The reasons for this are not immediately clear.  Belgium had come into being through revolution only a few years before in 1830.  The country clearly possessed a revolutionary history and tradition.  It was close to the epicentre of events in France, and Belgian exiles in Paris were busy organizing propaganda and recruiting among the large number of Belgian migrant workers in France to form a Belgian Legion which might carry armed revolution back over the border.  The economic conditions in Belgium were, if anything, even worse than in France, and so ostensibly more propitious for civil conflict.  This was especially true in the provinces of East and West Flanders.  British competition had effectively wiped out the most important in the region, the linen industry, during the 1840s.  The potato blight had ruined three harvests in a row, undermining the peasant farmers’ and smallholders’ ability to feed themselves.  Even before 1848 local and national government recognized that the labouring populations of Flanders were suffering a crisis of hunger, poverty and unemployment.  As we have seen in previous posts, one of the answers to this crisis was to invest in lace schools.  However, the revolution of February 1848 in Paris would deal a blow to this industry too.  Flemish lace was made for export, mostly to France.  But luxury trades were always the first to suffer during political turmoil.  The French fashion houses weren’t buying, which meant the Belgian merchants were left with stock on their hands, which meant that they stopped putting out work to their domestic female workforce.[1]

This crisis affected the countryside but also towns like Courtrai, Bruges and Ypres where lace remained the most important employer of female labour.  The local authorities were particularly worried because, as much male employment was seasonal, over winter whole families depended on the wages that lacemakers brought in.  On 13 March, little more than a fortnight since news of the Paris revolution arrived in the city, the lace merchants of Ypres got together to lobby the government in Brussels on behalf of their industry.[2]  They sent a deputation to the Minister of the Interior, telling him that in the borough of Ypres alone there were more than 20,000 lacemakers, that lace was the sole industry of any importance to survive the crisis years of the 1840s, but that now this population too was threatened with misery.  They warned of ‘grave disorders’ if something was not done.[3]  And something was done, as the Government provided 60,000 francs of credit to the lace merchants, so that they could keep putting out orders to their workers.  Or at least that was the idea, there is some dispute about what actually happened to the money.[4]

‘Lacemakers don’t protest’ wrote one of their foremost Belgian chroniclers, explaining their invisibility in history.[5]  And so it proved in 1848, despite the fears of the authorities in Ypres and elsewhere.  West Flanders in general remained remarkably calm, despite occasional incursions by radicals and armed groups from France.  The border, only fourteen kilometres away from Ypres, was reinforced, adding an extra layer of difficulty for lace exporters (and smugglers).

However, there were some attempts to provoke lacemakers to action.  Thursday 26 June 1848 was ‘Kleinsacramentsdag’, the Thursday following Corpus Christi (a moveable feast).  This was the holy day of Ypres lacemakers, and the Wednesday preceding was ‘Mooimakersdag’, the lacemakers’ holiday which in previous years had been celebrated in some style.  The lace schools were festooned with garlands of flowers, while troops of lacemakers in fancy dress, and led by their ‘queen’, were carried off on great waggons to picnics in the surrounding countryside, much like those pictured in Watteau’s painting of ‘The Feast of the Bobbin’ in nearby Lille.  In preparation for this holiday, printers would produce new songbooks which were sold in the market-squares and other public places by street-singers.[6]  On 25 June 1848 one such broadside song drew the attention of the authorities, and it is reproduced below, followed by a rough translation. 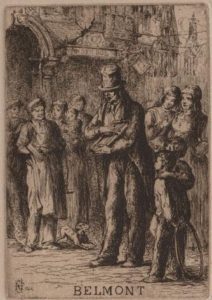 An 1864 etching of the Antwerp streetsinger Belmont by Hendrik Frans Schaefels (1827-1904). Many nineteenth-century streetsingers became quite famous characters but we have found no portraits of Ypres singers from the period.

To the tune of ‘The Butterpot’ no 1 or The Brabançonne

To friends who want to listen
And stay a while here,
I shall explain to you directly
How things fare in this city.
Lacemaker, you know it already,
It’s about our lace merchants
They have been feasting on our hearts long enough,
These pigs need to get out the way.

The tailors [buyers] have come on purpose
From the great city of Paris
They have heard the news,
They expect to get the best price,
Ready to turn the coats
Of prud’hommes and lace merchants
They’ll quickly learn French,
These traitors must be expelled.

To send these capons packing
The prud’hommes are now abolished,
Because we’re beginning to think
That these traitors have made too much,
They have had too much fun with our money,
Marching around with drums and music,
We should boldly celebrate on their jackets
As an example for our Belgium [?]

We should make our fashion flourish,
By making a new jacket,
And then we’ll celebrate without stint,
If we get a hold on this fashion,
We should drink and clink glasses
And so let innkeeper and his wife flourish,
And the lace merchants can go take a leap
We’ve wanted that for a long time.

Lacemaker, don’t let it grieve you
To face up to these barbarians,
We won’t let them shed our blood anymore,
We will fight for our standard,
And for the money that they took from us,
For our lace and thread casket,
The beautiful coins must return,
That they snatched from us.

Lacemakers, finally,
Don’t let this situation continue,
Because I urge you for your own good,
Before you go bankrupt,
And let us defend ourselves,
It’s for our own flesh and blood,
Then we can enjoy ourselves,
With the money from our sweet lace.

We must admit that some elements of this song, which was discovered by the archivist Joseph De Smet, remain opaque to us.[7]  We don’t really understand the author’s interest in ‘kazakken’ or jackets (perhaps it had some dialect meaning).  We don’t know the tune ‘The Butterpot’, though we assume den Brabanson refers to the revolutionary anthem of 1830 which is now the Belgian national anthem.

However, we can explain who were the ‘plaidons’ or ‘prud’hommes’ mentioned in the text.  The conseil des prud’hommes was an early form of industrial tribunal whose members were elected from both the employers and, in theory, workers.  The Ypres tribunal, set up in 1842, consisted of seven members, of which at least two had to be lace-merchants and one a male foreman or senior employee in the industry.  In practice almost all the elected members represented the employers, no employee representatives could be found for the simple reason that there were no male employees or tax-paying artisans of the kind designated by the legislation.  No female lace merchant (of which there were several) nor any female lacemaker (of which there were thousands) could participate either as electors or as members of the tribunal.  Yet almost the entire business of the tribunal was taken up by the lace industry: in 1846, of the sixty-two cases it judged, sixty-one involved lacemakers; in 1847 out of forty-three cases, forty-one involved lacemakers.[8]  And the lacemakers of Ypres were not happy with its rulings.  As the local papers observed, whatever the merits of such a system in an industrial town with clearly defined employees and employers, it was ‘clearly not fit for the lace industry’.[9]  If merchants cut lacemakers’ remuneration, claiming the work was shoddy or dirty, the lacemakers could only seek justice from the conseil des prud’hommes, where they found the same merchants sitting in judgement.[10]  In particular lacemakers complained that lace merchants were attempting to force on them the dreaded ‘livret’, or workbook which would effectively end their limited ability to negotiate wages by tying them to a single employer.[11]  In June the agitation had grown so great that the Mayor of Ypres placed public notices in the newspapers (unusually in Flemish) stating that he had written to parliament and to the ministry of Justice to make them aware of the lacemakers’ concerns.  In October 1847 a tailor, Pierre Maerten, organized a petition on behalf of the lacemakers against the prud’hommes.[12]  Neither action seems to have brought a positive result: of the seven members of the tribunal elected in January 1848, five were lace merchants.[13]  This is why the song links lace merchants and prud’hommes together as enemies of lacemakers.

The authorities soon got wind of this would-be rebel anthem.  The state prosecutor sent a copy to the Governor of West-Flanders on 1 July.  The author was identified and arrested: his name was Auguste Plancque, a former NCO in the Belgian army, but by then a day-labourer.  We do not know what punishment Plancque suffered but it was probably not too serious because when he died, in 1885, he was described as a retired postman, the kind of job that was often thought suitable for military veterans.[14]  The Ypres register of births, deaths and marriages also provides an explanation for Planque’s particular interest in the lace industry: in February 1843 he had married Marie de Graeve, a lacemaker.[15]

It seems Ypres lacemakers did not take up this song on Mooimakersdag in 1848.  However, they did have a whole repertoire of other songs to mark that day, and we have included the first verse of one such song below, so that readers can get a feel for lacemakers’ celebrations.[16]  And you can hear the whole song performed by the Belgian folk group Sidus on Youtube.

We’ve thrown our pillow into the shed,
Bobbins and pins and the whole caboodle.
This week we shan’t talk about work any more:
The tambourine is our music! 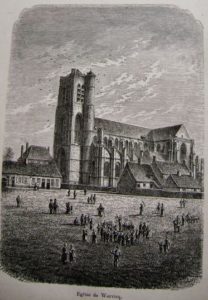 A streetsinger hawks his wares in Wervik, a town close to Ypres. This illustration by Emile Puttaert (1829-1901) appeared in Eugène Van Bemmel’s ‘La Belgique illustrée’ (1879).