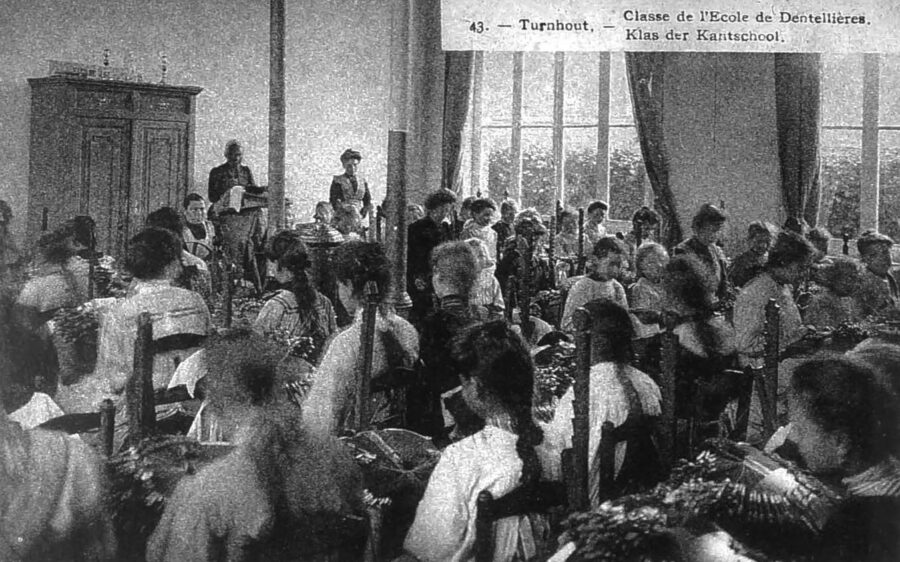 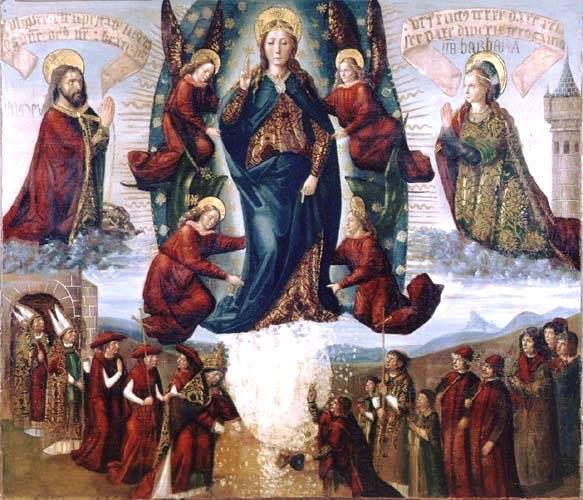 ‘The Miracle of the Snows’. Late C15, probably Flemish painting.

A very belated post for the Feast of Our Lady of the Snows, which fell on 5 August.  One of the Virgin Mary’s many titles, her legend is set in 4th century Rome, where a couple wanted to leave their fortune to the Virgin but had not decided how it should be spent.  At the height of summer, snow fell on the Esquiline Hill, and this miracle was taken as a sign that a church should be built there – what is now the Basilica of St Mary Major.  Until the fifteenth century Our Lady of the Snows was a largely Roman cult, but during the Counter-Reformation it spread across the Catholic world.

Our Lady of the Snows was much celebrated by lacemakers.  Some Bruges lacemakers said a daily prayer to her to keep their lace snow-white, as money would be deducted from their earnings if their lace was tarnished.[1]  (Historically lacemakers had several ways of making their lace as white as snow; some, such as the use of white lead, were incredibly damaging to their health.)  Lacemakers in the same city carried a gift of lace to the statue of Our Lady of the Snows in Bruges cathedral on her feast day.[2]  Brussels lacemakers had done the same until her chapel was pulled down during the French occupation of the city.[3]  However, we only know of two places where she was the patron of lacemakers: Almagro in central Spain – to which we hope to return – and Turnhout on the Belgian border with the Netherlands, which is our focus today. 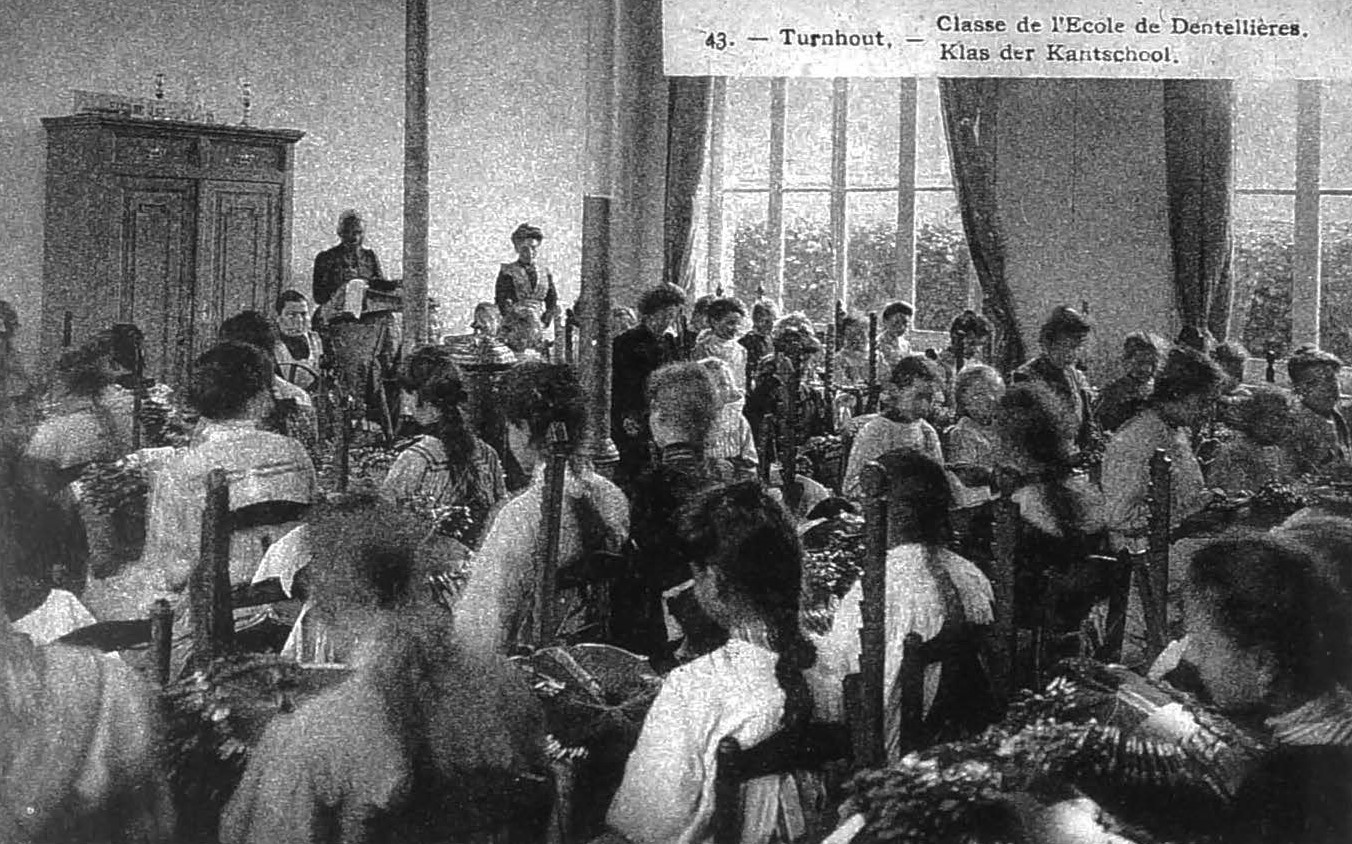 The model lace school in the Klinkstraat, Turnhout, founded in 1910. Old Postcard.

Unlike other Flemish centres, the lace industry in Turnhout seems to have thrived into the first decades of the twentieth century.  According to the American visitor Charlotte Kellogg, half the female population of the city were involved in the trade, including 1,800 girls and young women enrolled in the numerous lace schools.[4]  The largest of these were the religious institutions run by the Sisters of the Sacred Heart and the Sisters of the Holy Sepulchre, as well as the model school established in 1910 by Father Berraly, but there were also many smaller, private institutions with 30 to 50 lace apprentices.  Turnhout lacemakers graduated from the supposedly easier ‘Engelsche grond’ (point de Paris) to ‘halve slag’ (point de Lille) to the extremely fine and very expensive ‘Ijsgrond’ (point de Malines).  Perhaps it was this specialism in difficult laces that kept the handmade lace business buoyant in the region.  A Dutch socialist newspaper in 1910 complained that the women workers earned only 9-10 francs a week for 70-80 hours work, but compared with salaries in other centres in the west of Belgium this was comparatively high.[5]  The trainees in the lace schools earned much less, of course.  None the less, lacemakers in Turnhout had a strong sense of their own skill and worth, which found expression in their songs and in their patronal feastday celebrations.[6] 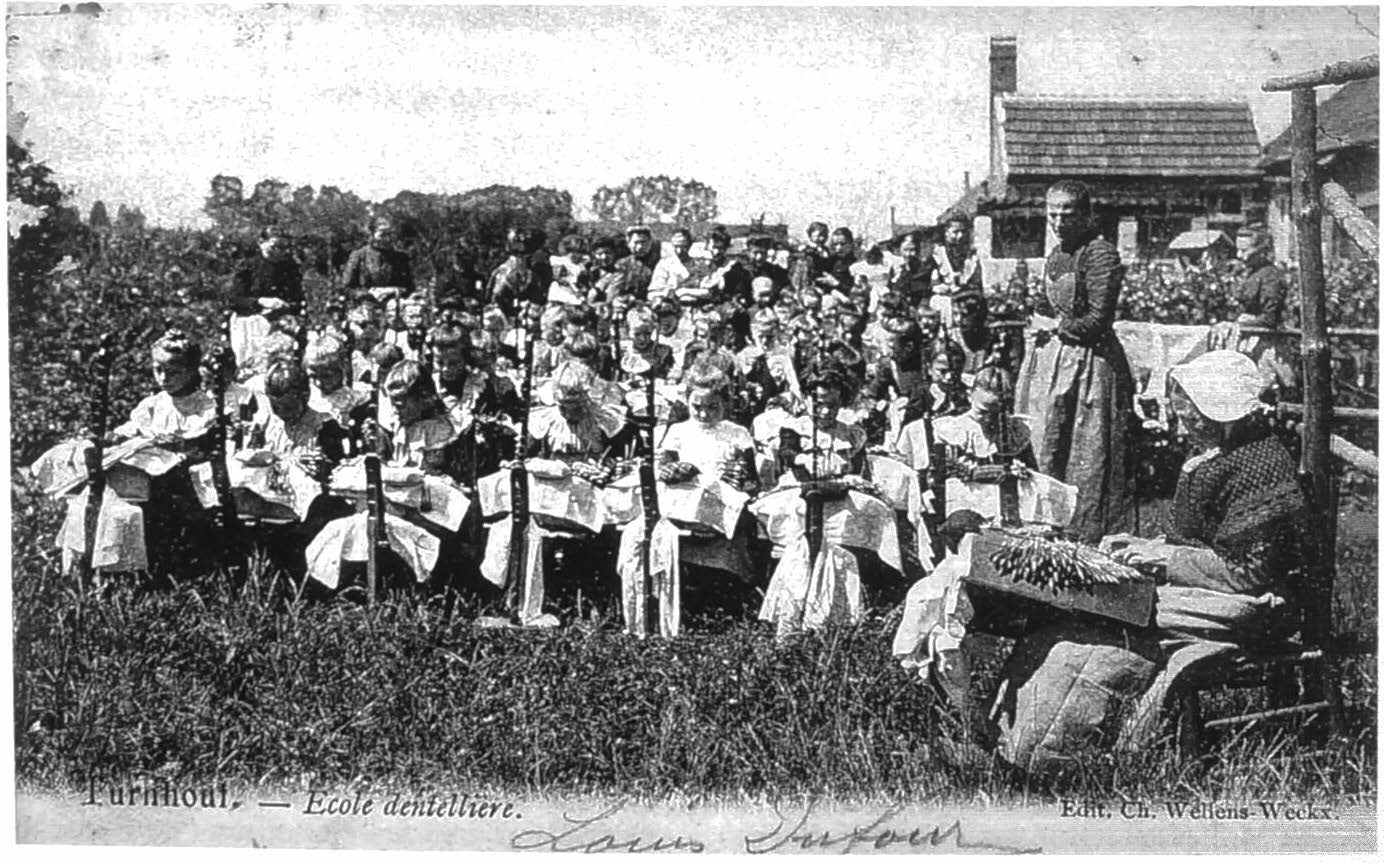 A lace school working in the open air. Turnhout postcard

As we’ve seen in previous posts about Saint Gregory’s in Geraardsbergen and Klein-Sacramentsdag in Ypres, the feastday celebrations were led by the lace schools rather than lacemakers more generally – indeed in Turnhout the day was named ‘domineeren’, that is the teachers’ holiday (akin to ‘dominie’ in Scots).  On the morning of the Saturday nearest to 5 August, the lace apprentices, in costumes covered with ribbons and paper streamers, formed rows behind a ceremonial arch likewise decorated with paper flowers and coloured, blown eggshells, from which was suspended a life-size effigy of a lacemaker at her pillow.  Each school, led by its mistress, then marched through the city, ‘singing, skipping, laughing and chattering’ as they went according to one witness, towards one of the numerous chapels and wayside shrines nearby.  The most popular was the chapel of Our Lady of the Snows (Onze Lieve Vrouw ter Sneeuw) in Oosthoven. 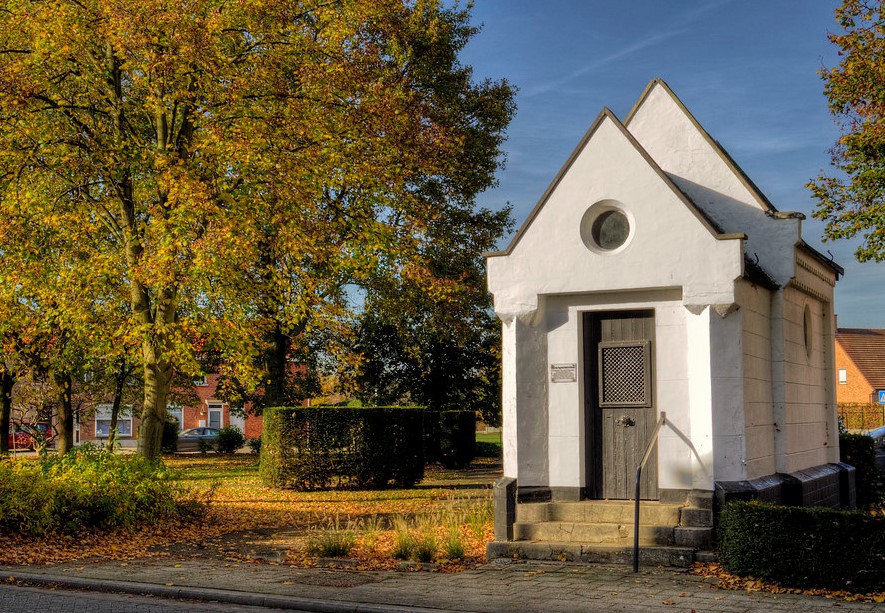 The chapel of Onze-Lieve-Vrouw ter Sneeuw in Oosthoven, near Turnhout

Here is one of the songs the lacemakers sang on their way: 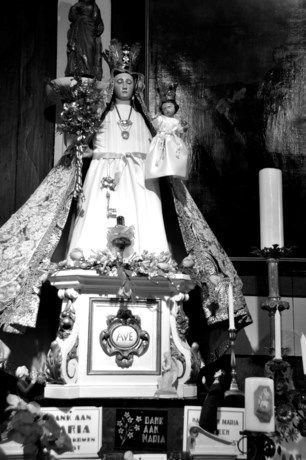 After a brief ceremony at the chapel, where the lacemakers prayed to Our Lady of the Snows that their lace should always remain white, the group travelled on to one of the nearby country inns, such as ‘De Vrat’ which features in one song.  Here the mistress stood the workers a drink – beer for the older girls, sage milk for the younger – and many ‘mastellen’, a local type of cinnamon bun (which also is named in a song). 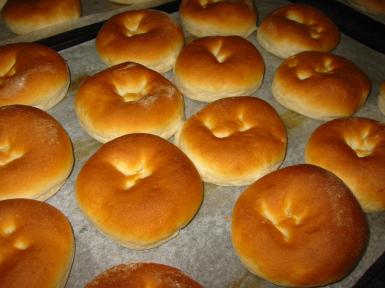 Mastellen in the oven. Eaten ‘without number’ by lacemakers on the feastday of Our Lady of the Snows

In return the lacemakers toasted their mistresses:

But while the lacemakers celebrated their skill, as we have seen on other Flemish holidays they could also express frustrations with the demands the work placed upon them:

On the journey back to the city, the various schools taunted each other:

But before they went home, there was one last symbolic act: the lacemakers’ burnt their festive arch and their lacemaker guy – a reprensentation of their teacher? – in a field, while singing:

Most of these songs were first collected by Canon Jozef Jansen, a priest and also later Turnhout’s archivist.  He noted that the custom was already moribund in 1910.  However, when another priest-cum-local historian Jozef Nuyts wrote an account of the feastday in 1939, he could still find living witnesses to tell him about it, while the radio producer Pol Heyns was able to record schoolchilden in Turnhout singing several of the songs.  Links to these recordings are provided here: 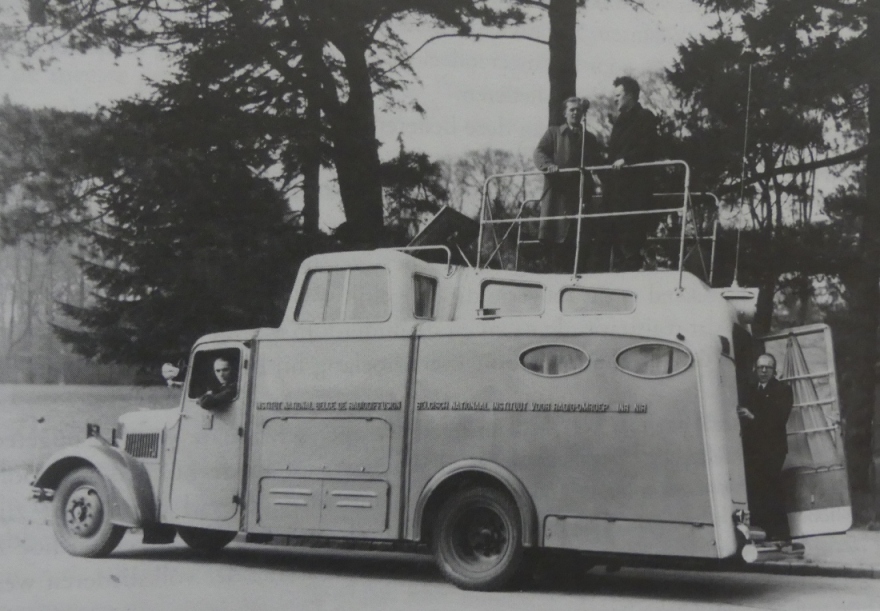 Pol Heyns (top right) on his radio car, from which he recorded songs all over Flanders. From the website https://schrijversgewijs.be/schrijvers/heyns-pol/