In our series on lacemakers’ holidays we have yet to fully cover the ‘Broquelet’, the ‘Feast of the Bobbin’ held in Lille on and around 9 May.  This date marks the ‘translation of Saint Nicholas’, that is the transfer of his relics from Myra in what is now Turkey to Bari in Italy, and it is known as ‘Summer Saint Nicholas’ to distinguish it from the saint’s other feastday on 6 December.  The Broquelet, which could last a week or more, was the major holiday for the city’s working women at the end of the eighteenth century, when Lille was home to 15,000 lacemakers.  Their pleasures are celebrated in a painting by François Watteau, dating from around 1800.[1] 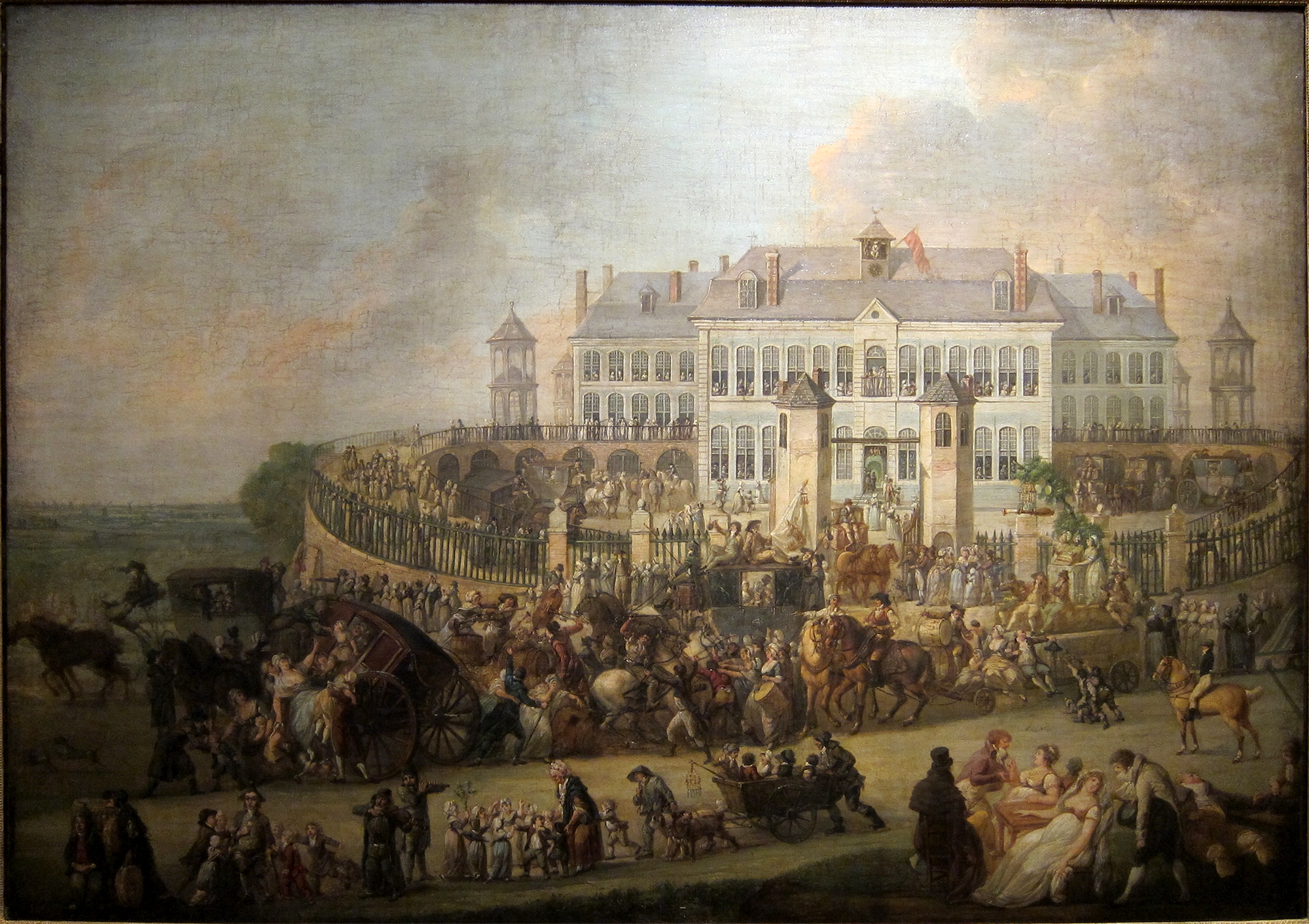 We’ll return to the Broquelet in a future post: today we’re just considering how Nicholas became the lacemakers’ patron saint.  Nicholas is, of course, Santa Claus, and so is a patron of children generally.  Children, and specifically the girls who attended Lille’s lace schools, were participants in the Broquelet – they can be seen in the foreground of Watteau’s painting, presenting a branch of hawthorn to their teacher.  However, in Catholic culture in general Nicholas is more associated with boys than with girls.  Across north-eastern France, and in the Low Countries, parishes organized their youth into single-sex companies dedicated to Saint Nicholas for boys, and Saint Catherine the girls.  These associations were carried over into schools in the nineteenth century, which continued to mark their respective feastdays of 6 December and 25 November.  And as we know Saint Catherine was a patron of lacemakers, and her feast was a lacemakers’ holiday in parts of the English Midlands and Antwerp province.

So how did Nicholas come to take on this role in the case of Lille’s lacemakers?  There is almost no official documentation concerning the Broquelet, and none of the chroniclers who attended the festival offer a clear answer.  By and large it was only incorporated trades – that is occupations which were represented by a guild — that held masses, paraded through the city and celebrated holidays; but lacemaking was a ‘free trade’ (as were most female-dominated occupations), and so it possessed no guild structure.  One possibility, then, is that the lacemakers simply joined in, and then took over, a feast originally celebrated by one of Lille’s male guilds.  Watteau’s painting offers some corroboration of this theory, because in front of the float carrying the lacemakers’ giant bobbin is a carriage on top of which sit two male workers – ‘filtiers’ [linen spinners] – carrying the flag of their confraternity which features Saint Nicholas performing one of his more famous miracles, the resurrection of three murdered children whose bodies had been left in a butcher’s brine tub.

However, there is another possible connection, and it relates to another of Saint Nicholas’s miracles.  According to the most widely read hagiography of the medieval period, Jacobus de Voragine’s Golden Legend, as a young man (and not yet a cleric) Nicholas had a neighbour, a man of noble birth who had fallen into poverty.  This nobleman had three daughters whom he intended to prostitute in order that he might survive from the money they earned.  To avert this fate, Nicholas threw a lump of gold through the family’s window at night on three separate occasions.  Each lump was sufficient to provide one of the daughters with a dowry.

In early modern Catholic Europe, the skills of lacemaking were taught in the institutions of the ‘great confinement’ of the poor, such as orphanages and workhouses, precisely because it would provide young women with a livelihood and thus save them from becoming prostitutes.  The same logic was invoked well into the nineteenth century.  When in 1841 the Mayor of Valenciennes appealed to Maria Amalia, Queen of the French, to support the re-establishment of a lace school in his town, he claimed that the project ‘would be of the highest moral value by teaching lacemaking to young girls whose poverty, in most cases, dooms to prostitution, the first of the vices that misery brings in its train.’[2]

However, are there stronger connections between Saint Nicholas and lacemaking than a general desire to keep young women off the streets?  In Valenciennes Museum of Fine Arts (currently closed) there is a painting that originally hung in the town’s Saint Nicholas church.  It depicts Saint Nicholas in the act of throwing the gold through his neighbour’s window.  Inside we see the father and his three despairing daughters, one of whom is sitting a lace pillow.  The painting is by Henri de Vermay (active 1612-1642), the second artist of that name, and the last in dynasty of painters from the nearby city of Cambrai.  The Vermays of Cambrai were possibly descendants of the Dutch painter Jan Cornelisz Vermeyen (c. 1504-1559).[3] 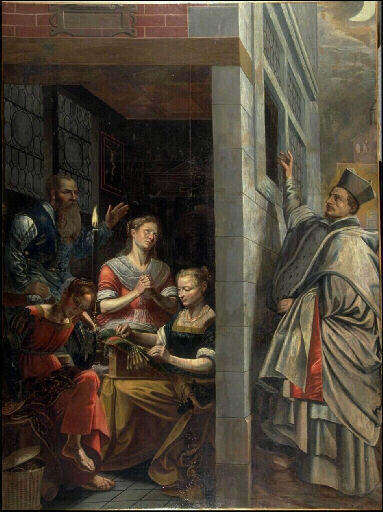 This is not the only painting from the period that depicts the beneficiaries of Saint Nicholas’s charity as lacemakers.  The Amsterdam Museum of our Lord in the Attic has another representation of the charity of Saint Nicholas by Vermay’s better-known Antwerp contemporary Cornelis de Vos (1584-1651), in which two of the daughters can be seen working at lace pillows, while the third is busy with embroidery. Paintings are only indirect evidence, but it seems that, in the Flemish-French borderlands, an association had become established in the seventeenth century between Saint Nicholas, his patronage of marriageable women, and lacemaking as a recourse of the poor.   This was the same period in which lace schools were being established in towns like Valenciennes and, possibly, Lille.  Although the history lacemaking in Lille is very obscure, it seems plausible that this same association of ideas explains why Lille’s lacemakers took Saint Nicholas to be their patron saint.

[3] The only source of information on the Vermay dynasty I have been able to discover is a pamphlet by Achille Durieux, Les peintres Vermay (Cambrai: J.  Renaut, 1880).