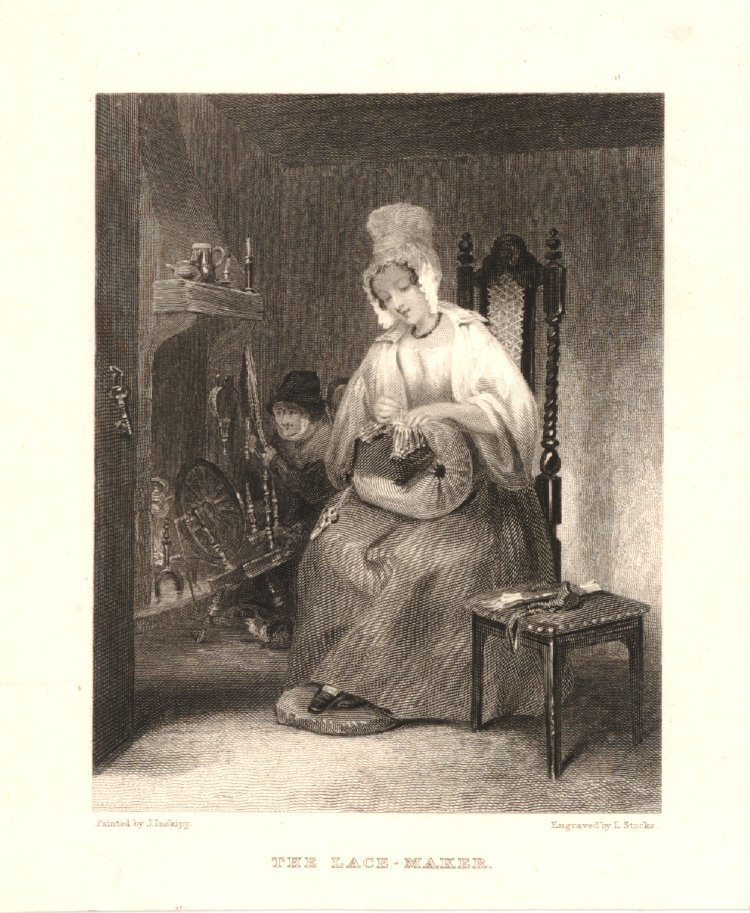 Most of the literature we’ve featured on this site has offered a critique of the conditions in which lacemakers’ worked, their poverty and the dangers – such as sexual predation – to which they were exposed.  The ‘real’ did not match the ‘ideal’, to take the terms used by Charlotte Yonge in The Clever Woman of the Family.  However, another comparison writers invoked was that between domestic labour on the one hand, and the factory on the other.  In order to understand why so many people invested so much in preserving the domestic lace industry, we need to know not only what they were for but also what they were against.  James Francis Hollings (1806-1862) makes this contrast between the ideal of domestic labour and the factory Moloch explicit in his poem ‘The Lace Maker’, published in the Christian journal The Amulet in 1835, and which is reproduced below. 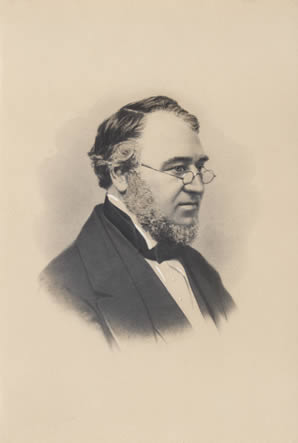 Hollings subverts the assumption that one gets more conservative with age.  In his twenties, when he wrote this poem, he was a Tory, committed to the landed interest.  In the poem, the squire in his hall protects the simple rustics around him, while they labour cheerfully in his fields without desire for any change in their situation.  There is no social antagonism in this fantasy, nor ambition, nor indulgence: each rank supplies the other with all its wants and needs.  Hollings makes the lacemaker his symbol for this idealized past: her work hardly counts as labour because it is so much part of the natural order.  Her mother keeps the young lace maker from harm, while the lord of the manor assures the health and wellbeing of the community at large.  Her domestic manufacture is accompanied by song, by conversation, by gossip, and thus the day (which is like all other days) passes happily.

But all this was before the spinning mill: now the young woman is enclosed in the factory, without access to fresh air and sunlight.  But the threat is as much to her moral as her physical health, or rather the two go together.  The promiscuity of the factory encourages vice, crime even, leading her onto early death.  The suffering of factory girls is compared directly to that of slaves in the new world: chattel slavery had been abolished in the British Empire the previous year but, as Hollings clearly knew, European critics were unimpressed by this act of emancipation when so many Britons were shackled to a new form of captivity.  The poem ends with an appeal to the leisured classes to liberate the imprisoned factory maid.

Whether Hollings remained such an enthusiast for bobbin lace, and lacemakers I don’t know, but his political views became more radical as he grew older.  He moved to Leicester in 1837 as a schoolteacher, and at first involved himself in historical, archaeological and literary activities.  But in 1849 he married Sarah Biggs, from a leading hosiery family which was noted for its Chartist politics.  Her brothers John and William Biggs were, at various times, councillors, lord mayors of Leicester, and MPs in the House of Commons (John for Leicester, William for the Isle of Wight).  They campaigned for compulsory state education and banning child labour in factories, among other things.  Under the influence of his wife and brothers-in-law, Hollings embraced radical politics, as well as a new career as editor of the Leicestershire Mercury. 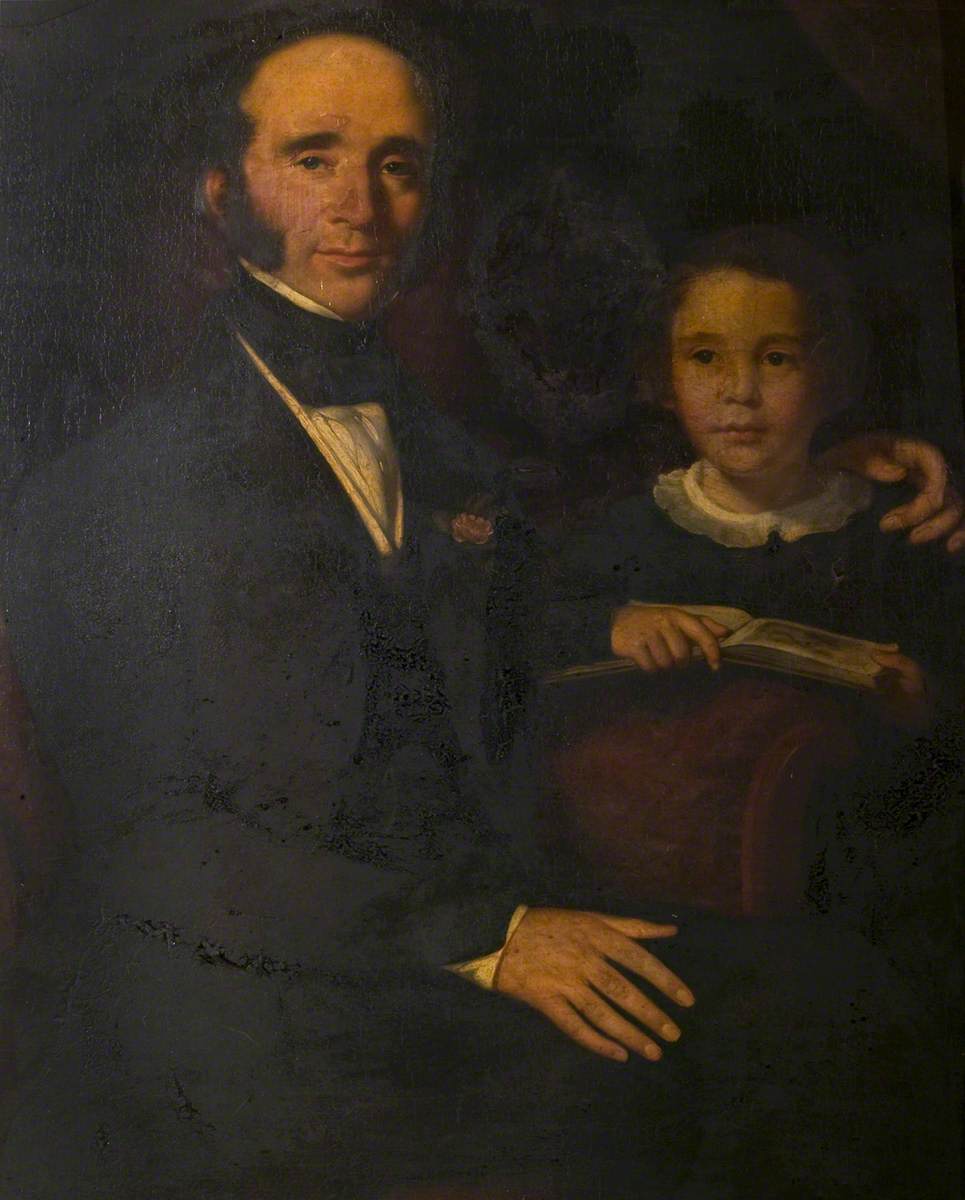 John Biggs (1801-1871) with his nephew Arthur: the reading child could be a reference to one of Biggs’ radical views on education.  From ArtUK: the painting is held in the Leicester Museum and Art Gallery.  A memorial to James Hollings, Biggs’ brother-in-law, was erected outside the Museum. While that was demolished in 1955, Biggs’ own statue still stands in the city.

When this poem appeared in 1835, it was accompanied by an engraving of a painting by James Inskipp – ‘A Girl Making Lace’ – which was in the Lansdowne collection in Bowood House.  It illustrates perfectly Hollings’ moral, with the young woman making lace in her cottage home while her mother spins by the fire.  This is precisely the domestic idyll that Hollings was trying to invoke, and revive.

THERE was a time — although departed long,
It lives but on the page of ancient song
When staid simplicity, and guileless mirth,
Dwelt unmolested on our peaceful earth.
As yet to life’s more sheltered walks unknown,
Ambition strove in distant courts alone;
And feverish luxury held remote its state;
And pomp to few unbarred its blazoned gate.
In ancient halls, his fitting place of rest,
Dwelt hoar Fidelity, an honoured guest;
And gentle Courtesy, with winning power;
And Humour, Proteus of the cheerful hour.
No emulative pride, with vain display,
Forestalled to-morrow’s gifts to sate to-day;
Yet rank to each a welcome could afford,
And sweet contentment graced the liberal board.
Then stood the mansion, as for centuries past,
Its walls had felt the sunbeam and the blast,
With circling groves, and lawn, for pleasaunce made,
And shielded portal casting far its shade:
Home of one race; nor destined to obey
From year to year a new possessor’s sway:
Nor far remote, as scattered in repose,
The modest hamlet’s quiet roofs arose,
Swart toil’s abodes, and such as to invite
Meek peace by day, and dreamless rest by night.

How lightly then, while cares and wants were few,
The hours of industry unheeded flew!
When mists yet wreathed the path of morning grey,
Abroad the sturdy peasant took his way;
Yet left not, sheltered in his walls behind,
The listless hand or uncontriving mind.
Soon as the murmuring bee its toils begun,
And dew-drops glistened in the mounting sun
The wheels’ low sound amidst the quiet shade
Announced the matron at her busy trade;
While, early trained to labour, at her side ,
Her graceful task the cottage maiden plied
Well-skilled to weave, with studded pillow set,
In meshes intricate, the snow-white net;
And, o’er its verge, as if disporting, spread,
To guide in varying forms, the filmy thread.
Thus stole the day unweariedly along,
From silence rescued by the voice of song,
Or converse, staid and simple, as beseems
The even tenour of the rustic’s themes
Tales of departed strife, or festal gay,
The pomp of annual wake or bridal day,
Of slighted presage, ominous and true,
Or spectre, seen beside the churchyard yew;
How in past times of dark distrust and fear,
Tempests and clouds had marred the smiling year,
And mildew seared the crops with midnight stroke,
Or fiery levin cleft the forest oak;
Whose wheat looked fairest from the upland glade;
Who ruled in vestries; who the market swayed;
And whose the voice which, on the day of rest,
The choir in anthems old acknowledged best.

Few are those scenes of cheerful labour now.
With downcast look and melancholy brow,
In factories pent, where dim the sunlight steals
O’er shifting frames, and strife of maddened wheels;
From morn’s pale glance till glimmering day declines,
The graceful form of childhood droops and pines,
Toil’s sickly thrall! and, from its hapless birth,
Barred from that wealth ordained for all on earth.
Unfelt the breathings of the wind which brings
Joy in its voice and freshness on its wings;
Unseen those hues of splendour which adorn
The glowing eve, or pageantry of morn;
Unmarked each rolling season’s course, or known
By different grades of bitterness alone;
But known too well the taint, which inly spread,
Pollutes life’s waters at their fountain-head;
Temptation’s wiles, and crime’s soon-quickened seed,
In whispered counsel, or in witnessed deed;
Affection’s blight; blind error’s stubborn will;
Want, first, nor least, prolific source of ill;
And, last, that wan disease, which day by day
Distorts and wastes, but far too stern to slay;
Despair’s vain wish of quick release denies,
And links with pain each moment as it flies.

Oh, ye! who, nursed in golden hours, possess
The power, but bounded by the will, to bless;
Who know, by consciousness long felt, how dear
The voice of childhood to a parent’s ear;
Say, in a land unknown to slavery’s tread,
Why weeps the infant at a fate more dread?
Why, while on shores remote deliverance stands,
And the riven fetter falls from Afric’s hands,
Domestic bondage? and, than bondage worse,
Life’s dawn exposed to sin’s contagious curse?
Why, in that atmosphere of guilt and shame,
Does virgin innocence forget its name?
Why, from the sense of harsh oppression wrung,
Dwells execration on the lisping tongue?
And why, where busy commerce holds her reign,
Does fancy view a Syrian Moloch’s fane?
Reply; and, when to truth’s keen quest denied,
Such evil lurks no more our hearths beside,
Then shall the care whose exercise secures
Another’s seed, a blessing bring on yours;
Then may our prayers, indeed, at Mercy’s throne,
For helpless orphancy and youth made known
Each peaceful Sabbath to the approving skies,
Mixed with no guilt of mockery arise;
And foreign calumny confuted flee;
And Britain vaunt, in truth, her name — THE FREE!

The Leicester Lit and Phil Society

Who’s who of Radical Leicester

On the Biggs’ family and its radical politics see

R.H. Evans, ‘The Biggs Family of Leicester’, Transactions of the Leicestershire Archaeological and Historical Society 48 (1972-3): 29-38.