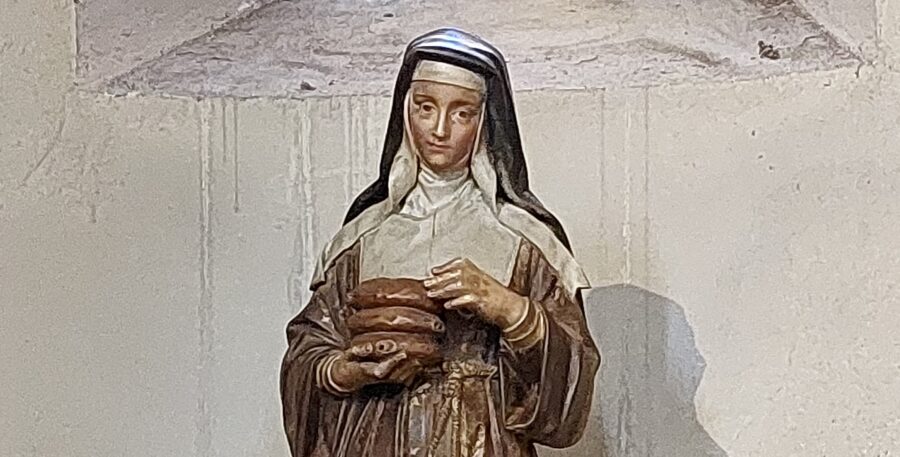 In Lacemakers and Religion

Lacemaking saints?  There are some but – given the close ties between lacemaking, female religious orders and the Catholic Church – perhaps not as many as one might have expected.

A lacemaker who was (and is) considered saintly, indeed was beatified by Pope John-Paul II in 1996, is the blessed Catherine Jarrige, known in her lifetime and after her death as Catinon-Menette.  Catinon is a diminutive of Catherine in the Oc dialect of the Auvergne, while menette is a popular term for a devout woman, or specifically a sister in one of the numerous tertiary orders found in the region.  The word may derive from ‘moine’ [monk] from which one gets ‘moinette’, little or female monk, and thus ‘menette’.  Menettes were akin to the ‘béates’ of the Velay and the ‘beguines’ of Flanders: while they took vows, they were not enclosed but lived in the world, practicing their vocation among the laity.  Tertiary orders of this kind were involved in making lace and teaching lacemaking in many regions.

Most of our information about Catherine Jarrige comes from a biography written by abbé Jean-Baptiste Serres who, as a boy, witnessed her funeral and in later life interviewed many people who had known her.[1]  She was born in 1754 into a poor peasant family in Doumis, in the highlands around the gorges of the Dordogne.  Her education was minimal: she was hired out to other farms as a shepherdess from the age of nine (she told some stories about the tricks that children played while supposedly guarding their animals).  When and how she learnt lacemaking we don’t know, but according to Serres, the occupation fitted with her plans for a pious life.  We do know that she was already established as a lacemaker in the town of Mauriac in 1774.  Lacemaking was a major industry in the region in the eighteenth century when, according to a local doctor, ‘this trade was the unique subsistence for the daughters of the labouring classes in Aurillac, Saint-Flour, Mauriac, Murât, and several of the country parishes’.[2]  While the industry declined with the French Revolution, and was in a parlous state at the beginning of the nineteenth century, the prefect of the Department of the Cantal was able to report that there were still 1000 lacemakers in Aurillac, 800 in Murat, 400 in Saint-Flour and 300 in Mauriac.[3]  However, as was the case of nearby Tulle, the industry did not long survive the dislocations of the period, and by the mid nineteenth century it had disappeared completely.

In Mauriac, where she would spend the rest of her life sharing a home with her sister, Catherine joined the tertiary order of Saint Dominic.  From then on, her life seems to have been entirely dedicated to feeding the poor, watching over the sick, bringing comfort to prisoners, and preparing the dead for burial.  Given her total commitment to these tasks, and given her complete abnegation (when people gave her food or clothing for herself, she handed it straight on to some other unfortunate), it seems likely that that lacemaking did not occupy a huge part of her life.  Serres barely mentions it.  None the less, in judicial documents of the revolutionary period, she is referred to as a lacemaker.

The Revolution was the epic of Catherine’s life: along with other tertiaries such as Françoise Maury, also a lacemaker, she organized a veritable resistance network.  The Revolutionary authorities (the ‘patriots’ in the language of the time) persecuted the Catholic Church before outlawing it completely.  From 1792 priests and other religious who refused to swear an oath to uphold the new constitution faced deportation.  From March 1793 non-juring priests found on the territory of France could be executed.  Some fled abroad, but others took to the woods and mountains, or found shelter with supporters, and continued to hold mass, give confession, baptize and marry the faithful.  If they were caught they might imprisoned, or transported to French Guyana, or guillotined.  Catherine carried messages to priests in hiding, she brought them food or warnings of patrols and roundups.  As priests were in danger of their life if caught with religious material, she carried sacred vessels for them to covert religious ceremonies held in barns, private rooms and sometimes in the open air.  These, along with religious writings, she concealed in leather (later metal) containers under her skirts.  She hid two priests in Mauriac for eighteen months, bringing them babies to baptize, alerting them to the dying who required last unction, serving as witness at clandestine weddings and godmother at christenings.  When priests or nuns were arrested she visited them in prison, and when one, abbé Filhol, was led to execution she accompanied him on his way to the scaffold. 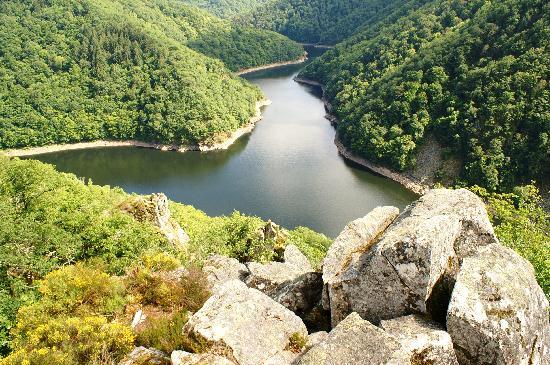 The gorges of the Dordogne, the region where Catherine Jarrige grew up. This landscape of mountains, forests and caves was ideal for hiding priests during the French Revolution.  Photo from Tripadvisor.

Both her convictions and her actions seem to have been common knowledge in region.  She was challenged by gendarmes and national guardsmen on dozens of occasions, questioned and even brought to court several times, but she came through the maelstrom relatively unscathed.  For example, on the night of 12 Thermidor Year 2 of the Republic (30 July 1794) she went to warn some priests of an impending search.  On her return in the early hours of the following day, she was arrested by National Guardsmen ‘soaked the skin and in a state that showed she had made a long journey’.  Arrested and brought before the Committee of Surveillance, she was accused, alongside Françoise Maury, of being ‘fanatics without limits, plotters with refractory priests, declared enemies of the Revolution, of liberty, of equality and of the Republic, and who in contempt of all laws, hide and conceal refractory priests, they provide them with means to live, and they use every means to protect them from the penalties that the law has pronounced against them.’[4]  On this occasion, news of the fall of Robespierre (on 27 July), may have helped save the two menettes.

Cyrielle Forses, from whose masters thesis we have borrowed this quotation, argues that misogyny prevented the authorities from taking Jarrige seriously: in the new Revolutionary world only men’s words and actions had weight, women were excluded from the rights of citizenship.  Yet elsewhere in France this did not prevent the authorities from imprisoning and executing women for far less serious crimes than Jarrige’s.  Serres offers at least two other explanations.  In his general characterisation of the menette, he alternates between portraying her as a ‘holy fool’, ‘she was the poorest and most ignorant, she stumbled as she read, she couldn’t even make the signs of the alphabet’ – and a cunning, artful peasant, constantly able to pull the wool over the patriots’ eyes, not least by playing the idiot.  One time she was stopped carrying a pyx (a container for wafers or, as the authorities put it, ‘a box in which Papists keep their God’).  Asked what it was she replied, ‘for tobacco’.  In Auvergne as elsewhere, lacemakers were famous snuff users and so the response seemed satisfactory.  (She used the same skills – audacity, verbal wit, and a certain slyness – to cajole the rich citizens of Mauriac into giving to the poor.)  The other reason was that at least some self-declared ‘Patriots’ retained sympathies for her cause, including at least one gendarme brigadier who were able to pass messages to Jarrige.  Serres notes that several revolutionaries none the less chose to be married by a Catholic priest, and have their children baptised.

The period of persecution lasted, with some periods of détente, nearly ten years, and Jarrige’s activities through this whole period read like a spy novel with disguises, secret signs, camouflaged hideouts, and many near misses.  All of which seems quite a long way from making lace, except that when priests were on the move they sometimes disguised themselves as lace dealers; an ideal deception because of course such dealers had every reason to move about the countryside, meeting their dispersed workforce, and carrying their produce to market.

Jarrige’s reputation for saintliness was well established in Mauriac long before her death in 1836.  According to contemporary accounts, the entire townsfolk, rich and poor, turned out for her funeral, and people literally fought to obtain a piece of her clothing as a relic.  Her memory is still honoured in the region today, as witnessed by this statue which we saw, last week, in the Church of Our Lady of the Snows in Aurillac. 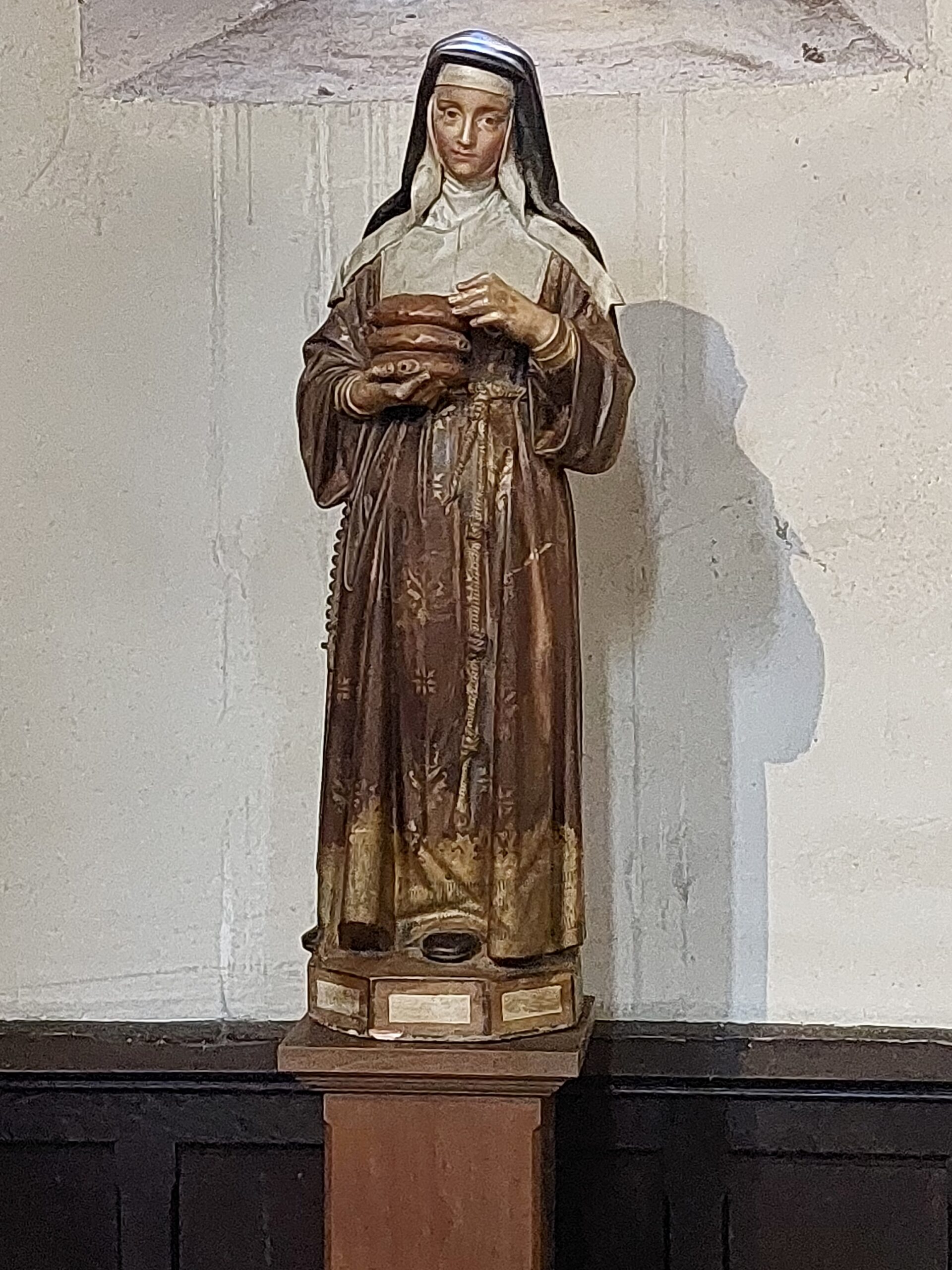 The Blessed Catherine Jarrige, known as Catinon-Menette. Statue in the Church of Notre-Dames-aux-Neiges, in Aurillac.