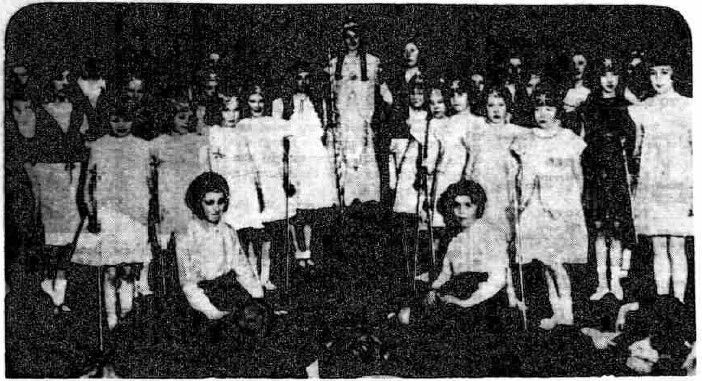 A scene from ‘The Lacemakers’, as performed by Murton Girls’ Friendly Society. From the Sunderland Daily Echo and Shipping Gazette, 10 February 1933. Courtesy of the The British Newspaper Archive.

As far as we can discover, the first performance of the three-act operetta The Lacemakers was on Thursday 11 November 1909 at Kington in Herefordshire, performed by children from the local school, with the proceeds given to the local cottage hospital.  Two weeks later it was performed, simultaneously, by schoolchildren in Hoole (Cheshire), by the Girls’ Friendly Society in Downton (Wiltshire), and by the choirchildren in Turvey (Bedfordshire).  The last two were, historically, centres of lacemaking.   From 1910 it was performed in a number of localities, particularly in the Midlands, many but not all associated with lacemaking.  During the First World War and after its popularity spread and there are newspaper accounts of performances in Wales, Cornwall, Sunderland, Kent, Essex, Yorkshire, Ireland…  It was put on by schools, Sunday schools, Girl Guides, The Band of Hope, Girls’ Friendly Societies, and other such organisations.  One of its attractions must have been that the majority of parts were female, and so it was easy for girls’ associations to put on.

Its plot of aristocratic patronage of the lace industry was particularly relevant to this period of attempted revival.   This account of the plot we owe to the Leigh (Lancashire) Chronicle and Weekly District Advertiser for 22 April 1910:

In a beautiful village that lies at the foot of a stately castle dwelt the lacemakers.  The lady of the castle offers a dowry every year to the maiden who works the best piece of lace.  The story opens with the completion of the year’s tasks; the maidens meet in the ‘Maidens’ Bower’ to put the finishing touches to their work.  Lola, the favourite of her companions, has a special desire to win the dowry, and everyone thinks her work the prettiest with the exception of Juana, who is secretly jealous of Lola’s popularity.  On finding Lola asleep and her finished work on her lap, Juana is tempted to steal it, and does so, to prevent her from winning.  Lola and her companions are in despair at the loss, and call upon the fairies for help.  The queen and her fairies appear, and, after hearing the story, promise to set the matter right.  The lacemakers are to go up to the castle as usual, leaving Lola with the fairies.  They do so.  After awhile their return is heralded by angry talking.  They are bidden by the queen to relate the result of their visit, and they say that the dowry has been awarded to Juana for a beautiful handkerchief, which they believe is Lola’s lost piece of work.  To prove the ownership of the lace that both girls claim, the fairy stone is brought which burns the fingers of the untruthful.  Then Juana confesses her guilt, and the dowry becomes Lola’s, to the delight of all her friends.

So we get the jist, but there are many things we don’t know about the operetta, such as who wrote it and when, or what songs were performed (other than “The Bold Bobbin”)…  If anyone can tell us we’d be delighted to know.  All our information to date comes from newspaper accounts, the most detailed of which is in an article in The Bedfordshire Times and Independent for 6 December, 1912 concerning Kempston Church Bazaar, which we’ve reproduced below.  (Thank you again, the British Newspaper Archive.)

The piece appears to be set in Spain, to judge by the names of the characters, which alludes to the supposed role played by Katherine of Aragon in the establishment of lacemaking in the English Midlands (see our post on Catterns).  The competition between lacemakers recalls that which featured in Caroline Barnard’s The Prize.  We suspect that elements of the play would feature in later pageants such as those organized by Prudence Summerhayes, but in the absence of a text it’s hard to be sure.  We hope a copy still exists somewhere.

Remarkable success attended the charming operetta entitled “The Lacemakers,” as performed by girls of the Bedford-road Schools and trained (after School hours) by Miss Beaumont (daughter of Captain Beaumont), and Miss Dakin, Head Mistress of the Girls’ School, where the play was presented on a stage which was dressed with arboreal properties to represent a woodland glade such as fairies delight to haunt.  The theme of the play was singularly appropriate in view of lace-making being an important industry of Kempston, and it was a very happy idea to introduce into the operetta a number of “Lacemakers” from the class in which Mrs Barnard takes so much interest [presumably a reference to the Barnard banking family of Bedford].  The other lace-making girls were admitted free to the entertainment, and on the previous evening the teachers and some 350 children were admitted to the dress rehearsal for one penny each.

The dresses worn by the girls in the play were exceedingly pretty.  In this and every other preparation to create a successful effect, Miss Beaumont and Miss Dakin spared no pains, and are to be congratulated on the highly successful result.  Assistance was also given by Miss Swaine and Miss Stevens, the latter being the pianist whose skilful rendering of the dance music and accompaniments of the songs conduced so much to the smooth running of the play.  Two performances were given on Friday.  In the afternoon the audience was select and appreciative; in the evening the room was crowded to excess, many being unable to gain admission, and the reception of the play was most enthusiastic.

A party of village maidens compete for a marriage dowry awarded by the lady of the castle to the one who produces the finest specimen of pillow lace.  Lola is expected to gain the award, but her lace is stolen by Juana and exhibited to the lady as her own handiwork.  She thus secures the dowry, but, by the aid of the fairies her deception is exposed.  Confession and restitution follow, Lola forgives the offender and all ends happily.  The action takes place in a secluded dell near the castle, a favourite resort of the girls by day and of the fairies in the twilight.  Much ingenuity and trouble had been exercised in transforming the stage into a suitable arena for these ethereal beings, and the effect was greatly enhanced by moonlight and other beautiful illuminations thrown by a lantern skillfully worked by Captain Seddon, C.A.  The girls had been trained by Miss Beaumont and Miss Dakin, assisted by Miss Swain and Miss Stevens, and the result was a performance of very great merit in every respect.  Sweet music, clever action, harmonious choruses, and graceful dancing were all of high excellence.

The chorus of Lacemakers and the fan song and dance were simply charming, and very pretty were the Dewdrops’ Song and Dance.  Zola sang with excellent effect the solo of “The Bold Bobbin.”  Hilda East as Lola and Irene Goff as Juana quite captivated the audience with their grace and charm, and Violet Welch as the Fairly Queen was at once gracious and dignified as fairy queens are expected to be.  In one scene the Lacemakers came forward and presented examples of their dainty handicraft to the Fairy Queen, and among them were collars, handkerchief borders, and other productions all made in Kempston.  The girls also had pillows and bobbins, so that the industry was represented with the prominence worthy of the craft. 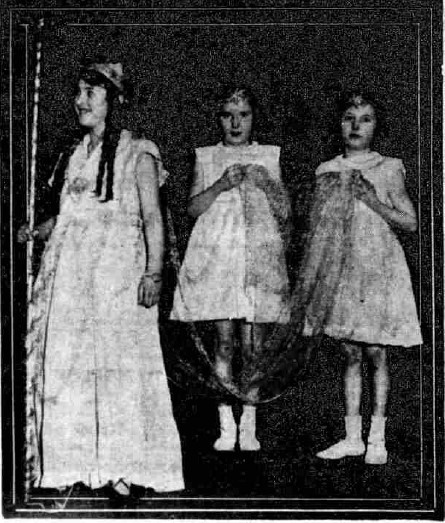 A scene from ‘The Lacemakers’, as performed by Murton Girls’ Friendly Society. From the Sunderland Daily Echo and Shipping Gazette, 11 February 1933. Courtesy of the The British Newspaper Archive.