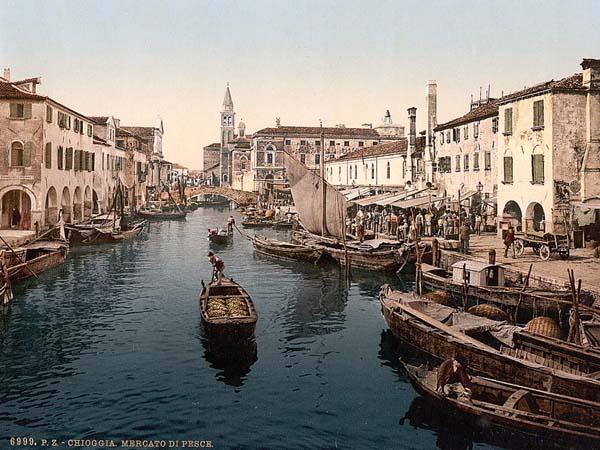 A brief trip away from Midlands lacemakers last September took us to a conference in Padua and then, briefly, to Chioggia, an island at the southern end of the Venetian lagoon. Why Chioggia? Apart from the fact it’s delightful? Because it is the setting for Carlo Goldoni’s 1762 play Le baruffe chiozzotte (The Squabbles in Chioggia; the link takes you to the Italian text) which is, to our knowledge (and as always we don’t mind being corrected) the only play that features lacemakers as its main characters. 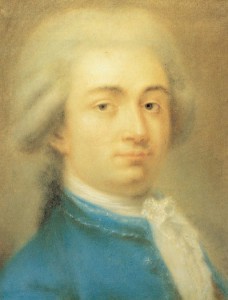 Goldoni is going through a bit of a revival at the moment thanks to the National Theatre’s adaptation of his 1746 Il servitore di due padroni, now known as One Man, Two Guvnors. We’ve not seen Le baruffe chiozzotte performed in English, but there is a published translation entitled It Happened in Venice. At the risk of judging a book by its title, this seems very much to miss the point, because it didn’t happen in Venice. The Chioggians in the play are at pains to differentiate themselves from their Venetian overlords, not least through their distinctive dialect. Perhaps the use of dialect explains why the play has also been translated into Scots by Bill Findlay and Christopher Whyte as The Chioggian Rammies (unfortunately we’ve not been able to access this version either). Goldoni, who was a judge’s assistant in Chioggia in the 1730s, was a radical playwright: he thought that the real lives of ordinary working people, such as the fishermen and lacemakers among whom he had lived in Chioggia, were suitable subjects for drama. Even their everyday street language could be permitted on stage. Unfortunately the upmarket Venetian theatre-going public did not agree, and Goldoni was forced to leave the city in 1762. Le baruffe chiozzotte was his last play there. 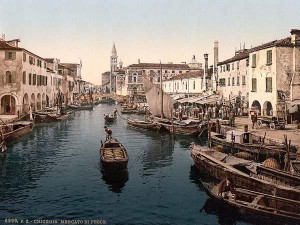 A view through Chioggia. The fish market (mentioned in Goldoni’s play) is on the right.

Act 1, scene 1 opens on a street in Chioggia where five women are sitting outside their houses with their lace pillows. Chioggia, like Palestrina, was a bobbin lace centre, perhaps another marker of its more plebeian character than Venice with its upmarket needle lace. On one side sits Pasqua ‘Frying Pan’, wife of skipper Toni ‘Fish Crate’, and her sister-in-law Lucietta ‘Little Lies’ who is engaged to the fisherman Titta Nane (a diminutive for Giambattista). On the other side of the street sit Libera ‘Capon’, wife of skipper Fortunato, with her sisters 24-year-old Orsetta ‘Brown Bread’, engaged to Lucietta’s brother Beppo, and 17-year-old Checca ‘Milk Curds’… who is jealous of Lucietta. Nicknames matter in Chioggia.

The women are chatting about the weather, with an eye to the expected return of the fishing fleet, when the young boatman Toffolo ‘The Squirrel’ upsets everything by offering slices of roasted pumpkin to one side of the street, but not to the other. To compound his fault (and to make Checca jealous) he goes and sits beside Lucietta, an engaged woman (!) on the pretence of being interested in her lace. This minor event leads to snide remarks, which lead to angry remarks, which lead to a full blown quarrel. The two sides then each relate an edited version of events to their menfolk when their boats return, leading to even more turbulence. Titta Nane breaks off his engagement with Lucietta, Beppo breaks off his engagement with Orsetta, and both the fishermen vow vengeance on Toffolo. After a skirmish on the street, Toffolo runs to the magistrate with yet another twisted version of events. As the law is not expected to be either fair or unbiased, this action has the potential to make things much worse; the men go into hiding, while the women try to win over the magistrate, or rather his stand in, young Isidoro (perhaps a representation of Goldoni himself).

Isidoro is a Venetian, patronizing towards, and exasperated by, the Chioggians, though amused enough by their antics to try and resolve their quarrels. Although his initial interventions only make things worse, with the women too now coming to blows, in the end he is able to sort things out. Lucietta marries Titta Nane, Orsetta marries Beppo, and Checca marries Toffolo. Isidoro rather fancies Checca, and finding her a compliant husband is one of the reasons he got involved in the first place. However, the last word goes to Lucietta, who tells Isidoro:

Lace is not a constant topic of the play, but it does play its part. Toffolo’s pretended interest in Lucietta’s lacemaking starts the whole quarrel, and later, when Lucietta is furious with Titta Nane and determined not to look at him, she justifies her behaviour by her need to keep her eyes on her pattern. The characters of the women are implied by their different lace skills: Pasqua makes cheap and easy lace, whereas Lucietta is working on a much more complex and expensive pattern. Checca, meanwhile, is making very slow progress on her pillow (though she claims that she has saved up fifty ducats from the profits of her work towards a dowry). That Isidoro has an eye for the ladies, and might be manipulated, is suggested by the fact that he pays twice the going rate for Lucietta’s lace.

Which raises an interesting conundrum for any future production… where do you find five actresses who can make lace? Or should they just pretend, as in this Italian production (the whole thing is on youtube)? Mutating lacemaking into knitting, as it appears some have done, we’d say is really not good enough! 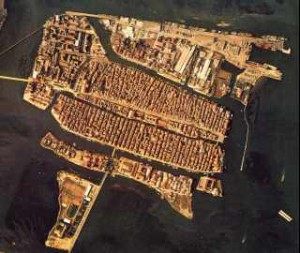 Chioggia from the air. According to the play, 40,000 people lived on the island, and as this picture demonstrates, living quarters were cramped!