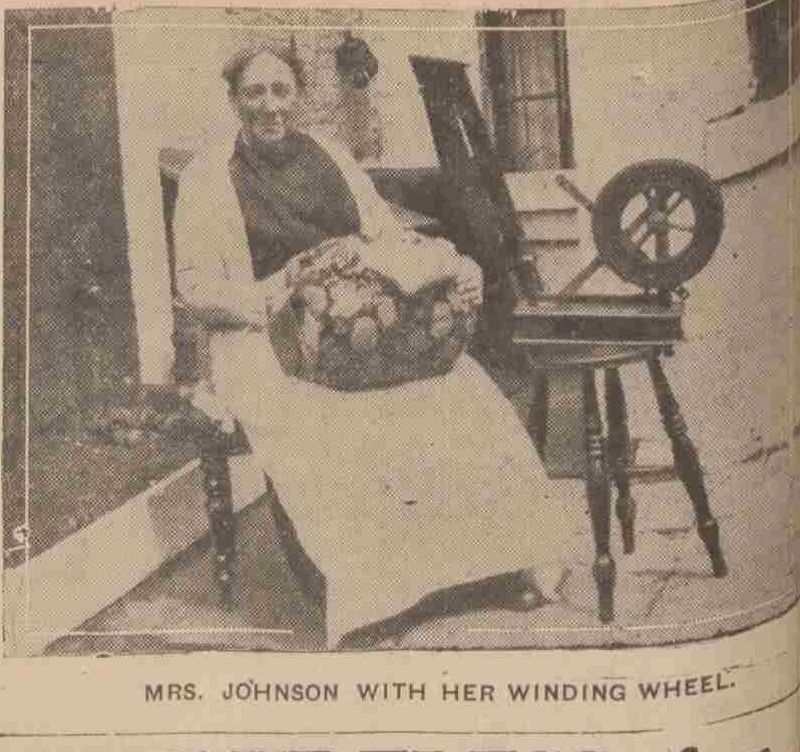 How do you understand the life of lace makers in the 19th and early 20th century, when they left very few records? Reading newspapers from the time can give us some clues to the thoughts and feelings of craftswomen, but surprisingly the tools of the trade also ‘speak’ to us across the decades.

The overwhelming fact of lace makers’ lives during the 19th century was poverty. Their fortunes were not only determined by changing fashions and the fluctuating trade policies of the Parliament, but also larger questions of foreign policy and power-shifts on the Continent. Characteristically, lace makers in England saw their wages rise when the French went to war: lace makers in the East Midlands, for example, enjoyed relative prosperity during and after the Napoleonic Wars (1803-1815) and the Franco-Prussian War (1870-1871). Even in such periods of commercial success, however, only a minute portion of the overall profits of the trade ever made it into the hands of the lace makers themselves. From 19th century sources, we know that the reality of a lace maker’s life was often harsh: Working from home, women were often forced to work for 8 to 10 hours daily, as well as running the household.

Despite a growing number of reports detailing the dire working conditions of lace makers and the adverse effects these had on women’s health, lace making was often publicly extolled as offering women a virtuous way out of poverty. Thus, in 1780, a parliamentary white paper considering a reinstatement of a previous ban on French laces remarked that lace making ‘only kept those Hands employed that would otherwise have been mischievous or idle’ and ‘while the Male Part of the Family were employed in Agriculture abroad, the Wife and Daughters were equally assiduous in their gainful Occupations at home’ (1780:2). The considerable gains from the industry, the author continued, ‘might be considered as a voluntary Tribute paid by the Rich to the industrious Poor’ (1780:2). Historian Elaine Freedgood has described this self-imposed patronage of working class lace makers by a nobility relieved from labour, and by the philanthropy of bourgeois housewives, as a mode of ‘utopian commodity consumption’ in which the supply and demand of the market was replaced by a language of ‘need and duty as affluent women are enjoined to support the efforts of labouring women’ (2003:628). Lacemaking, in short, was presented as a charitable means of preserving the moral virtue of labouring women by those who had no need to work themselves. 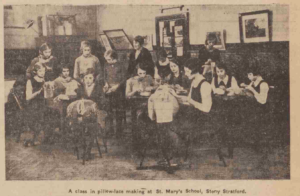 Lace makers themselves experienced craftwork as both a compulsive, almost pleasurable obsession, and straightforward drudgery. In 1933, the elderly Mrs Johnson told the Northampton Mercury that the life of a lace maker was one of ‘unremitting toil’; and yet she missed her work. Once, she reminisced, she had ‘sat from four o’clock in the morning to eight o’clock at night working on a cuff, and the pillow had to be dragged away from me. I wanted nothing more than to sit in my room with the door shut and the work in front of me’. Others, however, had much less sympathetic memories of the trade. In an interview in 1979, a Mrs Swain from Greens Norton, remembered how she was forced to make lace as a child: “I should say you’d find a piller [pillow] in everybody’s house that were poor people. All the women in the town [village] had to do it, and all the girls had to learn. I detested it. My mother used to say, when I come from school, “Now sit down and do your piller-work. The sooner you do it, the sooner you’ll get out to play.” She goes on to account how she later burned the lace making pillow, her mother’s bobbin winder, and the pillow stand – even though it had been made by her brother and was apparently ‘a beauty’. For Mrs Swain, the pillow, its stand, and the winding wheel had become symbols of the drudgery of the trade, and her enforced labour as a child.

Mrs Swain, however, did not mention burning her mother’s bobbins. Indeed, if one looks at both contemporary newspaper material and later accounts, lace makers’ bobbins are often spoken about in far warmer terms than other tools of the trade. This is partly due to the fact that they were a collection of tools unique to each lace maker. Hand carved or turned on a treadle lathe, bobbins were commonly made of wood or bone and could be intricately carved, painted, inlaid with pewter, wire-bound or inscribed with names and dates. Lace makers would sometimes thread charms and mementos onto their spangles, such as buttons, shells or coins. Bobbins inscribed with names were extremely common. They were often made to commemorate births and deaths, and many bobbins carried blessings and religious messages (‘Seek Salvation’). Bobbins carrying messages of love were also common gifts given from young men to their sweethearts. The power of a gift of a bobbin to create bonds between persons was exploited by people from beyond a lace maker’s immediate circle of friends and family. Bobbins with the names of political candidates and their slogans were distributed at election time and some lace dealers gave their workers bobbins as gifts. Lace makers generally worked for more than one dealer and these gifts may have been an attempt from the dealers’ side to monopolize the services of particularly talented craftswomen. 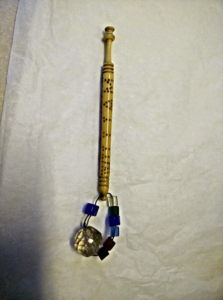 Bone bobbin decorated with the name ‘William’. From the collection of the Museum of Rural English Life, Reading 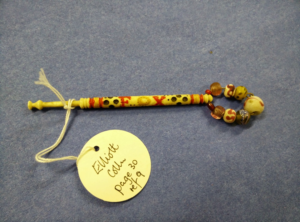 Bone bobbin decorated with the name ‘Fox’. From the collection of the Higgins Art Gallery and Museum, Bedford.

A lace maker’s collection of bobbins, then, was like a very personal, material record of her family relations, friendships, and love life. Indeed, in families where lace making had been a tradition, but was no longer practiced, it was often the bobbins which were kept for posterity long after pillows, pillow stands and other paraphernalia had been given or thrown away. Reporting on the revival of lace making lessons at St Mary’s School in Stony Stratford, the Northampton Mercury reported that two students arrived with such heirloom bobbins, enthusiastically claiming that they were 200 and 400 years old, respectively. While it is unlikely, although not impossible, that these bobbins had actually survived several centuries of pillow-work, the claims that they were extremely old seemed to be about presenting tangible evidence of these local families’ long involvement in the industry. Similarly, the aforementioned Mrs Johnson claimed that one of her bobbins had belonged to her great-grandmother and was 200 years old. Made of bone, it bore the inscription ‘I like my choice too well to change’. Bobbins, however, were also commodities – like lace-making, bobbin-making was a profession which ran in families – and as such, they were liable to be not only bought and gifted, but also stolen. In 1860, for example, the Bucks Herald reported that a certain Mary Dormer of Milton Keynes stole 12 bobbins from Hannah Robinson, and was imprisoned for 6 weeks for her crime. 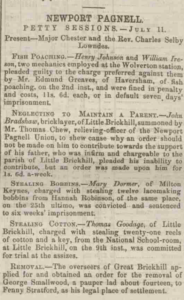