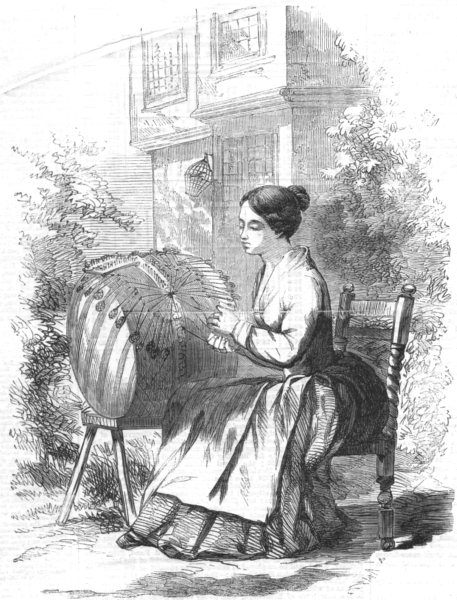 In Charlotte Yonge’s The Clever Woman of the Family, the fraud practiced on Rachel Curtis by the plausible Mauleverer is discovered when Rachel’s would-be suitor reveals that the woodcut images of lacemakers, supposedly engraved by the apprentices of the Female Union for Englishwoman’s Employment, had actually been cut out of the London Illustrated News.  The deception is discovered by Rachel’s would-be suitor, Captain Keith, who recognized the images from a magazine he had read while convalescing in South Africa from his wounds received during the Indian Mutiny of 1857.  We wondered whether any such images had appeared in this popular magazine, founded in 1842.  We did not find anything quite matching the ‘Ideal/Real’ contrasted images that are the alleged products of F.U.E.E., but in February 1859, roughly the date of Captain Keith’s convalescence, a relevant article and an image on pillow-lace working did appear in the London Illustrated News.  We reproduce them below.

The image is a distant relative of the one described by Yonge in the novel as representing “The Ideal” and depicting “a latticed cottage window, with roses, honeysuckles, cat, beehives, and all convention rural delights, around a pretty maiden singing at her lace pillow”.  However, if this is what Yonge had in mind, there is an irony in the fact that Mauleverer’s apprentice wood-engravers, former lacemakers both, could not have produced an image that depicted such a woeful ignorance of the actual practice of bobbin lacemaking.

Nineteenth-century images of single young women making lace at cottage doors are quite common; a similar image was used to illustrate an article on Honiton lacemaking in The Lady’s Newspaper of Saturday 20 September 1851; and indeed the Illustrated London News article and image were reused in their entirety in the Penny Illustrated Paper in February 1866.  However, we’ve not been able to trace a pre-1864 image akin to the “Real” picture described in the novel as showing “a den of thin, wizened, half-starved girls, cramped over their cushions in a lace-school.”  If anyone can help us track down an original that Yonge might have seen, we would be interested. 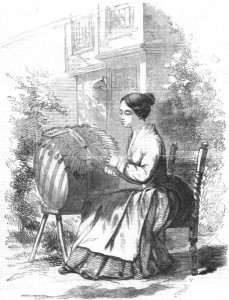 The illustration accompanying the article in the London Illustrated News.  ‘Ideal’ or ‘Real’?

In pleasant parts of Bedfordshire, Kent, and other southern counties, agreeable pictures are formed by the lacemakers in gardens, at cottage doors, and in neat apartments, where, although the furniture is homely, the cleanness of everything and the tasteful display of flowers in their season give a bright and cheerful aspect to the place.

There are few hand-wrought fabrics which look more beautiful than the delicate and cunningly-wrought lace, which was the pride of our ancestors of both sexes, and which seemed to have reached its greatest state of perfection in the reign of Charles I., when marvellous prices were paid for this elegant personal decoration.  Portions of lace of this date, of fine design and wonderful execution, are still preserved in many families, and handed down as heirlooms from one generation to another.  When looking at the intricate patterns of both old and modern lace, we have been puzzled to know by what magic it had been produced, and were glad to have the opportunity, in autumn last, of witnessing the process.

The pillow-lace is so called in consequence of being made on a pillow, or cushion, in the manner shown in the Engraving.  These cushions are generally of rich and harmonious colours, and form a foil to the “greenery” which is generally near.  The neat dresses of the lacemakers, old and young, and the fanciful designs and ornaments on the bobbins, are also pleasant to the eye.

On the pillow, which is stuffed with straw and raised to a convenient height on a wooden frame, the pattern of the lace is pounced through parchment, in the same way as the card-sheets formerly so much used for stencilling rooms.  This pattern is generally about the third of a yard long, and on the quality of the design the beauty of the lace depends.  The thread used is of remarkable fineness and strength.  This material is wound in proper quantities by a simple machine on the upper part of fifty or sixty bobbins, which are about the thickness and length of uncut blacklead pencils.  At the End opposite to that on which the thread is wound are rings strung with glass beads of various colours, and in some instances old silver coins and other simple keepsakes.  These matters are needed to give weigh to the bobbins, and to cause them to be moved with ease and precision.  Great fancy is shown in the fitting of these lace-making tools.  The bobbins used by one old lady had belonged to her grandmother, and were probably as old as the reign of Queen Anne.  Some of these were elaborately carved, turned, and decorated with silver and gold.  Some were of ivory: one was the gift of a “dear Robert” long since buried.  Each of the numerous bobbins seemed to have attached to it some cherished memory of the past.

The bobbins being properly charged with thread, the ends are joined and fixed to the top of the cushion in the centre of the upper part of the parchment pattern.  Here is also fixed a case thickly stuck with very small pins, which, as the work goes on, are placed in the interstices of the pattern cut in the parchment.  Round the pins, when rightly fixed, the thread is thrown and woven together by the bobbins, which are moved by both hands with remarkable quickness.

Although hand-lace weaving does not, after the pattern is prepared, require much artistic or mental ability, it needs great care, patience, and much practice to follow up the pattern, and leave in the proper places the different degrees of thickness of thread.  The process is very slow; and, during upwards of an hour that we watched the progress of a worker, not more than three-quarters of an inch in length and inch in breadth was completed.  It would take about four days’ close work to complete one yard in length.  The sum paid for this is about 1s 8d. a yard, and the thread has to be paid for out of it.

In the country a number of those who practice lace-making do so as a means of occupying spare time, and do not depend on it for a living, the young girls having in view the purchase of a new frock or bonnet.  In those districts, however, where lace-working is made a trade of by large numbers, children are put to it at the early age of five years; and, as is the case with most other departments of labour which can be soon learnt by young persons, the prices have declined.  Thirty or forty years ago a young girl could earn a shilling a day by this employment; a similar person will now, with difficulty, earn fourpence a day; and we are told that, notwithstanding the extraordinary demand which the present fashion of the ladies’ dresses has caused for this material, and although the price of thread has increased, wages have not improved.  The pillow-lace has a rich and artistic appearance and texture which is not to be equalled by other means; but the imitation is cheap, looks well at a distance, and is in progress of improvement so that, in all probability, the operation of lacemaking will, like the spinning-wheel and other matters once so familiar, soon become a thing of the past.

English Lacemakers in Fiction. Charlotte M. Yonge and ‘The Moloch of Lace’ in ‘The Clever Woman of the Family’ (1865)

The Barratts of Aspley Guise: Some Further Information