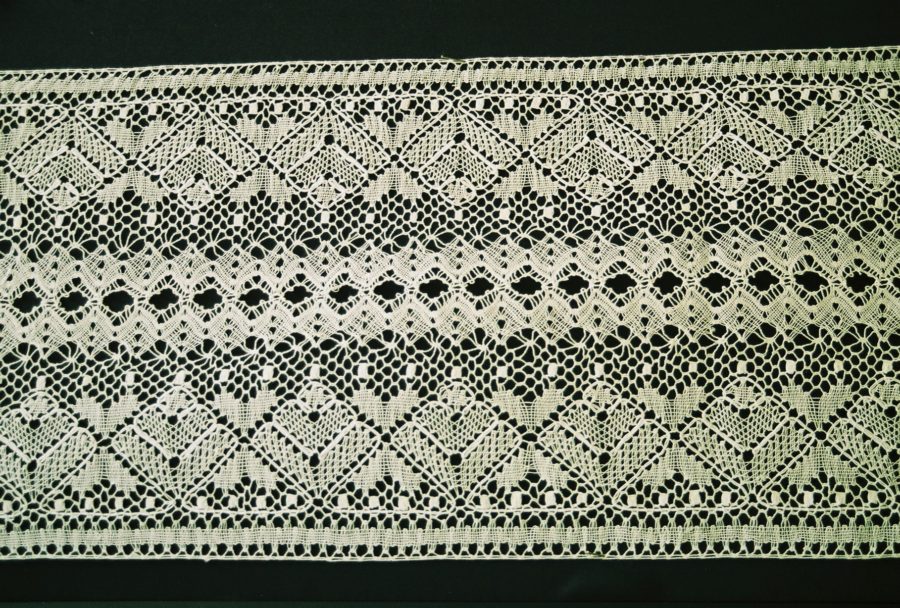 Doing fieldwork amongst bobbin lace makers in the Central Slovak villages of Staré Hory and Špania Dolina in the mid- to late 2000s, I was faced with an unexpected paradox: when speaking to me, artisans would present their craft work as a pleasurable hobby, then as menial labour, and later as a dangerously addictive obsession. In the very same conversation, I was told that making lace was ‘work’ and a way of ‘making do’ in times of economic hardship, and barely a breath later artisans would claim that craft practice was nothing more than a personal indulgence and a ‘labour of love’. Artisans seemed equally ambivalent in their descriptions of their experience of making lace itself. They would emphasize the emotional and therapeutic aspects of craft practice, and then warn me that it could develop into an obsessive ‘sickness’ or a kind of nervous disorder for which there was no cure. The process of making was described in terms of mastery and control, but also in terms of submission brought on by a seduction of the craftswoman by her own tools. 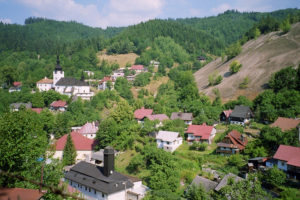 The lace making village of Spania Dolina in Central Slovakia.

Weaving lace, I was often told, is an emotional experience. This was most eloquently expressed by the lace maker I call Hana Majerová, who saw her special relationship with the craft as stemming from her memories of family life in the village of Staré Hory:

‘……very few of the women who do it today, have developed such an emotional relationship with it as I have, literally emotional, because for me, just the sound of the lace making, for me it is magical. It…already when my grandmother used to do it and I sat beside her as a child, it……is peace and quiet. And that is why I have a very good relationship to it, because….today, when people run, fly about, chase each other around, they don’t have time and I can afford to – quietly, with calm nerves and a calm soul – just sit and work.‘

Hana expressed the opinion that women in lace making clubs pursued technical perfection for its own sake, and that they could not have such an emotional bond with the craft because they had no kinship connections to the lace making communities in Staré Hory or Špania Dolina. Yet, I found that regardless of their family background, the vast majority of lace makers presented lacemaking as evoking emotion. I found that many of my informants fell into lace making a time of change or crises in their lives. Women continually pointed out that it ‘took the mind off’ marital problems or the grief at the loss of relative:

A characteristic description of the effect of intense sessions of lace making was the loss of the sense of time passing. Apart from making them ‘forget the time’, lace makers also told me that while making lace, there were periods when they lost awareness of what was going on around them. The American-Hungarian psychologist Mihaly Csikszentmihalyi has described this experience as a state of ‘flow’. Characteristic of this ‘flow’ sensation, is that the actor – completely engrossed in their activity – concentrates on the skills needed to perform the task and the limitations and possibilities presented within, reflecting little on what may happen around them. I found that learning a new stitch or a new pattern was well-known a source of such a ‘flow’ experience for local lace makers. As the lace maker Jana Horvathová recounted:

‘And this, when I was learning………I couldn’t learn the half stitch. The lady who taught me would ask ‘What are you doing?’ And I (would say) ‘I’m undoing again’. And now look how nice it is! I like doing it now. And I was giving up, ‘I won’t do it’ I said.‘

The pleasure with which Jana described how she finally learned the half-stitch illustrates how the acquisition of skill was experienced emotionally. Jana had quite literally mastered the half-stitch because it was only when she was no longer engaged in a frustrating battle with bobbins and thread which did not respond to her efforts that she experienced the ‘flow’ sensation which followed confidence in craft activity. 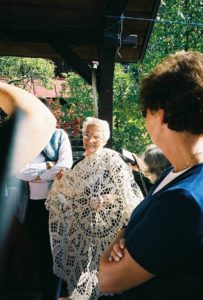 A lace maker from the village of Stare Hory, Central Slovakia, shows off a lace tablecloth.

Mastery, therapy, and control, however, were only some of the terms which lace makers used to articulate the emotional outcome of their tactile involvement with their pillow. Indeed, compulsion and obsession emerged as the ‘darker side’ of craft work in my conversations with them: there was apparently a constant danger that the therapeutic value of lace making could be subverted and rather than the lace maker gaining control over the process, it would force her into submission. All my informants described lace making as their love, but also as a curse. Craftswomen warned beginners – half mockingly, half seriously – that lace making is a ‘sickness’ which will never release them once they have come under its spell. Several lace makers told me that they became ‘unwell’ if they did not have an ongoing project pinned on their pillows at all times. This meant that they suffered from a sorts of nervous frustration which could only be mitigated by vigorous activity:

Receiving new designs, lace makers described themselves as grabbed by an irresistible urge to execute it, and stubbornly refused to complete other tasks before they had mastered it. Upon encountering a problem, they stayed up long after the rest of the family had retired to bed to battle it out with the pillow, or found they could not rest:

‘Well, when I have a new pattern, I get up at five in the morning. It won’t (leave me alone), I have to get up. To see whether I can master it or I can’t master it.‘

This submission seemed not only to have a pleasurable aspect, but also an addictive power. The un-worked pillow often came up in conversation as a picture of seduction, the pillow itself often being treated as the lace maker’s partner (or adversary) in the process of production. It was not unusual for artisans to stroke (or hit) and speak to their pillows (‘Sit still’! or ‘Now, look what you have done’!). 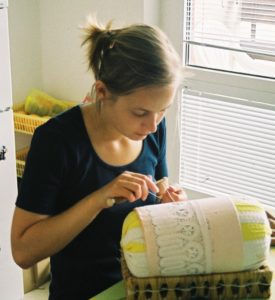 Lace makers were keen to emphasize the pleasurable aspects of lace making (the paired aspects of therapy and submission). However, as I befriended different artisans, I began to hear them speak of craft activity in much more instrumental terms:

‘Well, in the summer I don’t make much anyway, when it is so hot, your hands sweat. (So one can work better in the winter?) Yes! (But there isn’t any light?) During the day I work 2-3 hours, and then again in the evening…Everywhere the light has to be turned on at 4 – 5 o’clock, so I work until 9 – 9:30, but only with the white thread. I can’t work with the dark ones, because that is [too much] on the eyes.‘

Jozefina Mišíková was a lively elderly lady, who at the age of 70 began selling her lace by renting stands at folk festivals and seasonal markets across the country. Mišíková reasoned that she was lonely after her husband’s death, but also that she needed an extra income to supplement her meagre old age pension. Despite her advanced age, she was not only willing to travel several hundreds of kilometres to attend festivals, but she was also a very astute saleswoman, quickly mapping which festivals were worth attending, as well as the tastes of various groups of clients. Mrs Mišíková’s efforts to gain a small income from her craft work were not unique: Whether in Banská Bystrica town, or in the villages of Špania Dolina and Staré Hory, lace making emerged as a way of ‘making do’, that is, of supplementing the income from employment, old age pensions, and social benefits. For some informants, like the 26-year-old designer Jaroslava Genderová, who worked for a local clothing manufacturer in Banská Bystrica, ‘making do’ through lace making was a vital part of the family’s domestic economy – the manufacturer she was working for was limping towards bankruptcy and owed her several months wages. As another lace maker living in Špania Dolina told me: Well in this day and age every crown is precious. I don’t mean just for me, but for the other ladies too, for everyone.

The history of lace making as cottage industry in the villages of Špania Dolina and Staré Hory means that the craft has always been associated with the need for ‘making do’ in these communities:

‘(So you learned how to make lace as a small child?) Yes, probably about at the age of 9. I started working then……every day, I had to make such two-three forms (worth), and then mother went to sell it, when there were 5 meters. Because that is how we made our living. Father was always ill. So, my mother worked and I did too, she taught me.‘

This lace maker’s description of her childhood in the 1940s was typical of that of many of my elderly village informants. The association of lace making with poverty alleviation was further strengthened after the Communist Party’s collectivisation of craft work through the ÚĽUV2 and the organisation Kroj (literally ‘folk costume’), in the early 1950s. As one of my lace making teacher told me:

‘We used to get orders for holidays, where it had to be done, Sunday, not Sunday, holidays no holidays, it had to be done. So many times I worked all of a Sunday or holiday, so I could get it done. She knew who would do it. (Did they pay more?) No, well they did, but not much. You got more for being able to do more and more complicated (designs). I tried. Those who didn’t need to, didn’t.‘

Ana Paličková’s statement that ‘(t)hose who didn’t need to, didn’t’ take on difficult orders reveals a pragmatic attitude contrasted to women’s propensity to call their lace making a ‘hobby’ or ‘obsession’ at face value. Moreover, Mrs Paličková’s comment shed light on the apparently addictive nature of lace making practice: It not only suggested that craftswomen were able to resist its seductive aspects, but that lace makers highlighted various aspects of their craft practice according to the context in which it is spoken of. For example, the lace maker Dagmar Babjaková described lace making both as an obsessive hobby (‘Well, when I have a new pattern, I get up at five in the morning. It won’t (leave me alone), I have to get up’) and a source of income (‘Well, in this day and age every crown is precious’). Pleasure and pragmatism, just like submission and mastery, were not incompatible, but appeared to be used instrumentally by craftswomen in conversation.

When I left the Slovakia and began writing up my findings, I assumed that the experience of lace making as both a pleasurable hobby and as drudgery was unique to the Slovak environment – that is was the result of the harsh economic climate following the end of communism, alongside specific local traditions of domesticity, ideals of femininity, and traditions of lace making as a way for women to supplement the income of their male family members (fathers, husbands, brothers, sons). And yet, when studying the historical experience of lace makers in England in the 19th and early 20th centuries, I found that craftswomen expressed many of the very same mixed feelings of enjoyment, obsession, and distaste towards the craft (see the blog post: Pleasure and Pain: What can lace makers’ tools tell us about their lives?). This begs the question of whether – and to what extent – such feelings are the result of the experience of craft work itself, and how much this experience of making is itself influenced by the social and cultural context in which it takes place. 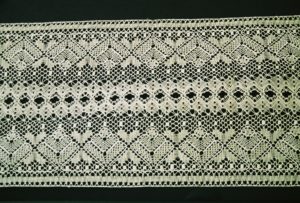