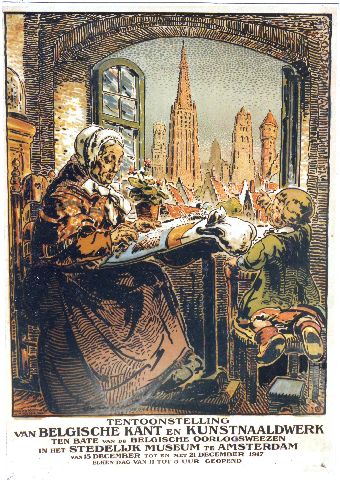 Lacemakers in the Poetry of the First World War 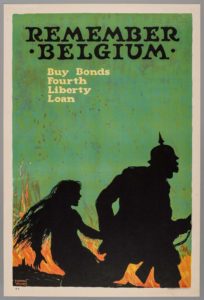 As we are not far off the final centenary commemorations of the war on the Western Front (1914-1918), it might be worth highlighting the place of lacemakers in the poetry of the First World War.  Why do lacemakers appear there alongside mud and shrapnel and barbed-wire?  Because lace was already associated with Belgium – even serving as a metonym for the country on postcards – and Belgium’s sufferings at the hands of the occupying German army were a key theme in Allied propaganda, particularly during the first year of the war.  It is important to state that these sufferings, and these atrocities, were real;[1] however, the way they were presented for propaganda purposes meant that the lacemaker occupied a particular place in the wartime imaginary.  The invasion of a neutral country was repeatedly described as ‘the rape of Belgium’, and the event was visualized as the assault of defenceless women by German soldiery.[2]  Lacemakers were usually pictured as either young apprentices or older women, and therefore seen as particularly vulnerable; they were associated with nuns, convents and beguinages – places of peace despoiled by the invaders; and the delicacy of their creative work made an arresting contrast with the destructive jackboot. 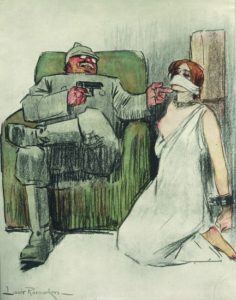 Louis Raemaekers, ‘Seduction’, 1916. Raemaekers was a Dutch illustrator whose anti-German cartoons were widely distributed in the first years of the First World War.

Alongside the violence perpetrated on civilians, propagandists also emphasized the destruction of cultural treasures, such as the deliberate burning of the library of Louvain University.  As lace was one of Belgian’s principal cultural exports, the fate of the product and its producers under occupation was a live issue throughout the war.  In November 1914 the wife of the American ambassador, Mrs Brand Whitlock, helped set up the ‘Brussels Lace Committee’, through which supplies and orders from American women philanthropists were channelled to Belgian lacemakers, starved of work and  resources.[3]

Much of this propaganda was aimed at the United States, and it seems to have had an effect, to judge by the two poems below, both written in 1915-16 by North American poets.  Neither, as far as I am aware, had any direct experience of the conflict; they were not writing from the trenches.  However, both were well-travelled and may have known the Belgian cities they evoke from first-hand experience (although I have not been able to document this).

Frank Oliver Call (1878-1956) was a Canadian academic and occasional travel writer who had visited Europe before the war.  His poetry is moderately well-known in Canada.  ‘The Lace-Maker of Bruges’ appeared in his collection In a Belgian Garden in 1917.  (It may well have appeared before in a magazine, but if so I have not traced it.)  It was reprinted in his more overtly modernist collection Acanthus and Wild Grape in 1920, when the date August 1915 was added.  Presumably the anniversary of the invasion prompted the poem: Bruges had been occupied since October 1914 so the tread of trampling German feet was no new event in August 1915.  Although Bruges largely escaped physical destruction, it became a German military (in fact naval) base and was subjected to the barrage of measures that made civilian life increasingly miserable in occupied Belgium.[4]  Call’s poem invokes pre-war literary theme of Bruges as an ancient and decayed city — Bruges-la-Morte as it was titled by the francophone Flemish writer Georges Rodenbach — a place where sunbeams go to die.[5]  Everything here is dim, grey, silent, peaceful; even the lacemaker’s hands are idle – an odd image in poetry, where the rapidity of lacemakers’ fingers usually invoke awe.  Or at least it was peaceful until the irruption of German noise and violence.  This lacemaker appears old, and as we have already seen in our post on Guido Gezelle, it seems difficult for writers to imagine Bruges lacemakers at any other age.  This is how they appeared on postcards, and in novels such as Gustaaf Vermeersch’s Klosjes, klosjes (1903).  The connection between lacemakers and religious monuments such as the Onze-Lieve-Vrouwekerk (Notre-Dame) in Bruges, was, as we have seen in previous posts, well established in visual culture. 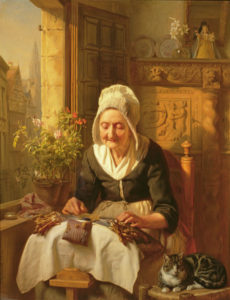 Josephus Laurentius Dyckmans (1811-1888) ‘The Old Lacemaker’ (1844).  This is one of the first images we have found in which a lacemaker is portrayed with a view of a church through her window, but it would become a commonplace by the First World War.  Note too the flowers on her windowsill.

The Lace-Maker of Bruges
By Frank Oliver Call

Her age-worn hands upon her apron lie
Idle and still. Against the sunset glow
Tall poplars stand, and silent barges go
Along the green canal that wanders by.
A lean, red finger pointing to the sky,
The spire of Notre Dame. Above a row
Of dim, gray arches where the sunbeams die,
The ancient belfry guards the square below

One August eve she stood in that same square
And gazed and listened, proud beneath her tears,
To see her soldier passing down the street.
To-night the beat of drums and trumpets’ blare
With bursts of fiendish music smite her ears,
And mingle with the tread of trampling feet

George Tucker Bispham (1881-1948) is less well known as a poet than Call: offspring of a wealthy Philadelphia family, he made only an occasional foray into literature.  After Princeton and a spell at Oxford he took a radical change of direction and set up the White Grass Dude Ranch in Wyoming.  Various of his pre-war poems appeared in journals connected to Princeton.  ‘The Lacemaker of Ypres’ appeared in the American journal Poetry: A Magazine of Verse in 1916.  As in Bruges, so in Ypres, lacemaking was the most important source of work for women before the war.  But unlike Bruges, Ypres, though unoccupied, was in the front line, for most of the war.  The remaining civilians were evacuated in May 1915, during the Second Battle of Ypres, incidentally the first battle in which the Canadian Corps played a substantial part.  Thereafter the city was a ruin.  This poem utilizes some of the same tropes as Call’s.  Again the lacemaker appears old (or at least she has known her songs ‘for many a year’), and is placed in visual rapport with a church, here St Martin’s Cathedral.  She lives hard by Ypres’ flower-market, not as famous as that of Brussels, but nonetheless a location that connects the lacemaker to beauty and delicacy (some forms of lacemaking were known in Flanders as ‘bloemenwerk’ [flower work]).  As we know lacemakers were famous for singing while they worked, and Ypres lacemakers in particular had an extensive repertoire of ballads, some of which had been published around 1900.[6]  But lacemaker’s song is choked off in a ‘last scream’ as war eradicates all these feminine attributes of peace and fragility. 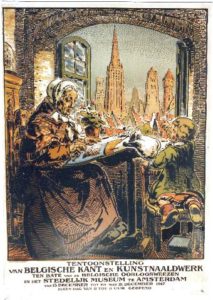 Poster for an exhibition of Belgian lace, to raise money for Belgian war orphans, held in Amsterdam in 1917. Note the church towers (drawn from a number of cities) that the lacemaker can see from her window. The flowers still retain their place on the windowsill.

Much of Ypres was rebuilt after the war, including the main market square and St Martin’s cathedral.  But despite the attempts of American and Belgian patrons, its lace industry could not be revived.

The Lacemaker of Ypres
By George Tucker Bispham

“Most of the houses in the Grande Place are in ruins.  The town is uninhabited.  Only the dead are left.  But the enemy keeps on bombarding – apparently to pass the time.”

She passed the hours
In a friendly solitude;
Heard the voices, wrangling shrewd,
In the market-place of flowers;
Clatter of cart-wheel; sounds that drifted—
From her open window, saw uplifted
Her cathedral towers.

While passed the hours
Her thoughts would find some little song,
Loved for many a year and long
In the market-place of flowers;
When days of summer drifted, drifted—
And in the peaceful sky were lifted
Ypres’ cathedral towers.

To pass the hours,
Since her last scream was choked in dust,
Shot and shrapnel spend their lust
In the market-place of flowers;
Smoke is drifted, drifted, drifted—
Lonely in the sky are lifted
Christ’s cathedral towers.

[3]  The work of the committee is discussed by Charlotte Kellogg in Bobbins of Belgium: A Book of Belgian Lace, Lace-Workers, Lace-Schools and Lace-Villages (New York: Funk & Wagnalls Co, 1920).

A lacemaker’s home in Milton Keynes. The reminiscences of Dame Joan Evans