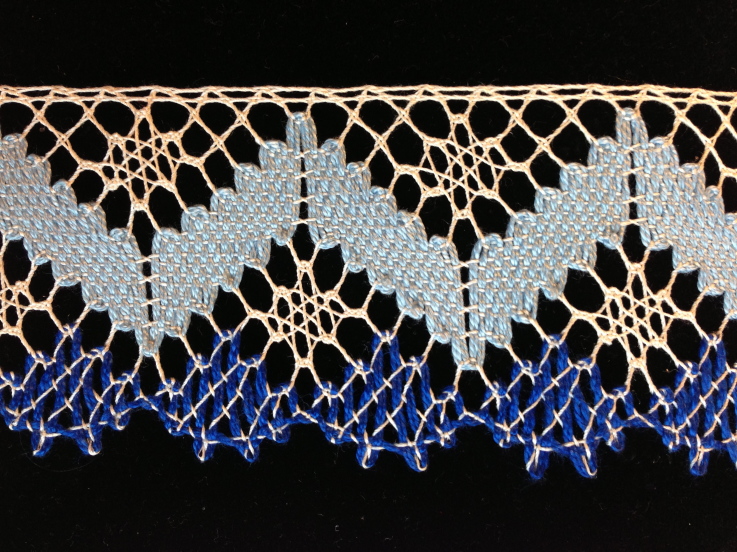 Problems of Price, or Who Buys Coloured Laces?

Snuggled amongst the thick forests and hilltops of the Low Tatra Mountains, Central Slovakia, the village of Špania Dolina appears to have an isolation ideal for preserving centuries old craft traditions like bobbin lace making. Accessible only by a single, small road that winds its way from the steep valley below, it is full of picturesque stone cottages built up the steep mountainside. Public transport to and from the village is sparse and in winter heavy snowfall cuts it off from the outside world for days at a time. 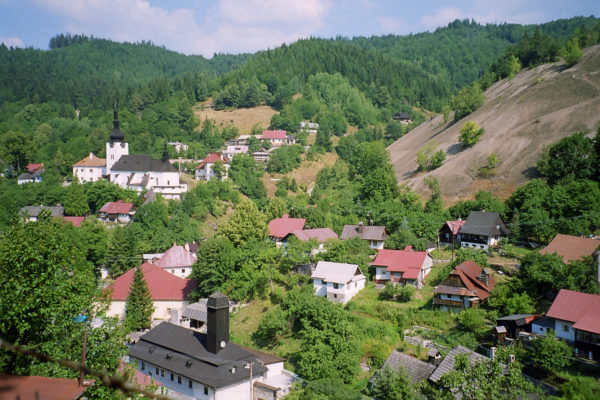 Špania Dolina was founded in the mid-thirteenth century, when the discovery of an exceptionally high content of copper and silver in the local rock led to the establishment of primitive mines in the local area. In the early 15th century, the powerful Augsburg banking family, the Fuggers, formed the world’s first mining corporation together with the Hungarian Thurzo family, in order to invest in and exploit the riches beneath Špania Dolina (and other villages in the local area). Seeking qualified labour, the Fugger-Thurzo corporation invited German and Bohemian miners familiar with the newest technology of the era to settle in local villages. Špania Dolina – known then as Herrengrund – became the site of a very successful mining business with two large shafts, one accessed directly from the centre of the village. It is thought that the technique of bobbin lace making was brought to the area by the wives of these miners. While the mining industry provided a steady employment for local men for almost three centuries, lace making established itself as a local cottage industry as women supplemented the income of their husbands by making and selling lace.

The lace produced in mining villages tended to be white or cream in colour, made of finely spun linen and metal thread. As lace was a commercial product, the styles produced followed the dictates of fashion. While most of the lace was meant for the rising urban bourgeoisie, lace makers in mining villages also had regular markets among certain villages in rural areas where peasant women relied on a steady supply for the decoration of their costume. 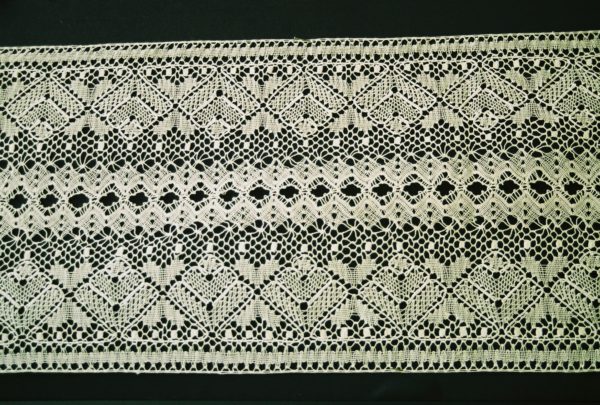 By the mid-19th century, however, the local rock was depleted of valuable metals and the mining boom was well and truly over. Both of Špania Dolina’s mining shafts were closed, starting a long, slow decline of the community into poverty and hardship. The lack of local employment led villagers to seek a life elsewhere; some emigrating as far away as North America. Well into the middle of the 20th century, it was common practice for male villagers to work as migrant labourers in mines and factories elsewhere, leaving behind their wives and children. According to the village Kronika – a record of the village complied by schoolmasters and mayors over more than a century – Špania Dolina’s population fell from 1106 in 1893, to 706 in 196, and eventually having only 150 inhabitants in 1990.

During this time, lace making remained the only constant source of income available within the village. The cottage industry helped keep families afloat, and children were often required to make lace to help support their families until they could leave school at the age of fourteen for jobs as servants or as unskilled labour in the nearby city of Banská Bystrica. Lace making was an integral part of the socialization of children and part of social life: in the evenings, women would gather at the homes of friends and family and make lace in small groups – a custom known as priadky. It was also sold to the owners of the village shop and to shops in Banská Bystrica. A few lace makers, called ‘flagniarky’, would purchase lace from their fellow villagers and travel across Slovakia, and beyond to Hungary, Romania, Croatia and Slovenia to sell their wares. These travels were often undertaken by unmarried young women in small groups who were relatively free from household responsibilities. In other words, without lace these communities would not have remained financially and socially viable. 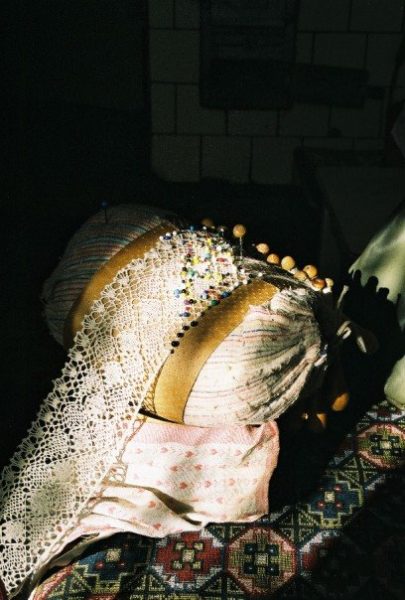 Ironically, Špania Dolina today prospers on its past marginalisation. The end of the mining business allowed the recovery of the local ecosystems which had been destroyed by the industry, granting Špania Dolina much of the pleasant, romantic charm that attracts domestic and foreign tourists alike. Declared an architectural heritage site by the socialist Czechoslovak government in 1965, the fact that most villagers lacked the funds to modernise their homes now plays to the village’s advantage. Lace making, for so long associated with poverty, has now become a celebrated local craft. Indeed, by the time I started doing fieldwork in the village, craftswomen in Špania Dolina were already used to getting attention from not only from ethnographers, but also the local and national press, as well as domestic and international television crews:

‘I am always getting letters, because many people know me as a lace maker. From America too. Now Polish TV came when the Pope was here in Bystrica [visit of John Paul II in 2004]. Well, they came here first of all for the lace. And I asked ‘what did you come for?’ And they said for our Holy Father and for lace and please make some lace. And they filmed me. They were interested in it, because they make lace in Poland too. They make a lot of lace there. People are interested, because it is handicraft. When they see those bobbins, well that alone says something’.

Lace and lace making offered a window to the outside world for these craftswomen, most of whom were elderly, spoke no foreign languages and had travelled little beyond the borders of Slovakia. As lace diffused out of the village and – quite literally – into the wider world, lace makers would find themselves receiving postcards, letters of thanks and photos from Europe and beyond.

Lace also facilitated cross-cultural encounters within the village itself. Many lace makers made a large amount of smaller, relatively inexpensive lace edged doilies, furniture covers and tablecloths for the tourist season. They chose designs that were not laborious, but had proven popular with clients in the past. One lace maker who I visited frequently made all her lace in one design, and selected the colour of her materials according to what she perceived was the taste of German tourists. Local lace makers claimed that while Slovaks preferred their lace white, cream or the colour of unbleached linen thread, Germans and Americans liked pieces where brightly coloured threads were used to create or encircle motifs in a neutral hue. Indeed, it was generally acknowledged amongst the craftswomen I knew that Germans and Americans loved brightly coloured lace, and gaudy artefacts. However, despite their regrettable lack of taste, they were thought to be the nations most partial to buying lace and having the deepest purses. 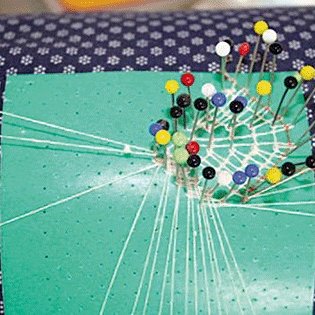 Tourists were always welcome clients. Attracted by Špania Dolina’s architectural heritage, the mountain scenery, paths marked for walking and hiking, or the lace itself, both Slovak and foreign tourists wandering into the village usually had little prior knowledge about the number of craftswomen working there, how to approach them or indeed, whom to approach. They most often bought from the first (and only) lace maker they encountered and were unaware of the individual variations on the local style that marked out the product of one lace maker from that of her colleagues. Lace makers saw no incentive to change the relative lack of information for visitors. In fact, in some ways, it worked to their advantage: tourists did not spend much time deciding on which piece they would like, they generally payed willingly and were not very knowledgeable in terms of quality or skill. Best of all, tourists disappeared taking their piece and the secret of the price away with them.

Price – and sales in general – were a touchy subject. Most of the lace makers I encountered appeared to negotiate the price of their products at the moment of sale, working with a ratio of social distance (that is, acquaintances were charged least for a piece, strangers more, and foreign tourists the most). When tourists tried to haggle with them, however, they were accused of wanting to buy the lace ‘for nothing’. Lace makers did not agree on any general pricing system, or advertise and sell their laces together. Rather, every lace maker worked for herself, leading to the feeling that they were all competing for the same clients and income. Sales were the stuff of local gossip. Lace makers I visited would speak of their own sales as lamentably few and far between and then wonder out loud whether their friends and neighbours ‘were working’ (probably hoping I might provide the answer). The assumption was that any women who were making lace were doing so for a client.

Because sales were such a difficult subject, lace makers constantly sought to deflect attention from their commercial endeavours. Sales involved an elaborate ritual of verbal disclaimers and a display of specific body language. Typically lace makers would excuse themselves with financial problems or told the client that sale ‘covers the cost of materials’, and they made sure to underline their own incompetence in retail matters by saying that they didn’t ‘know how to set a price’. The sales I observed were generally accompanied by squirming, cast-down eyes and phrases such as ‘I really don’t know what to ask’ and ‘I don’t sell expensively, I’m not that sort of person’.

However, this was more than simply a performance designed to protect lace makers from criticism or make the buyer feel they got a nice discount; many craftswomen found sales genuinely shameful and delegated commercial transactions to a friend or relative. These people usually worked voluntarily to facilitate orders and relay payments for finished pieces, making use of their own social and professional connections in order to place lace artefacts in commercial outlets. Such work was understood as ‘favours’ and ‘helping out’ amongst friends and family, and never paid. In this way, sales remained hidden from public view and lace makers could feign disinterest in the commercial aspect of their practice. However, it also meant that the line between favours and commercial transactions became blurred, complicating their relationships with friends and family. 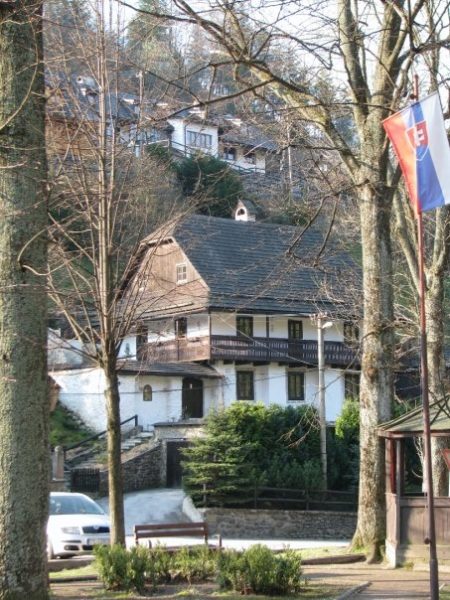 All images by the author; except the blue/white lace sampler (sourced from http://laceioli.ning.com).